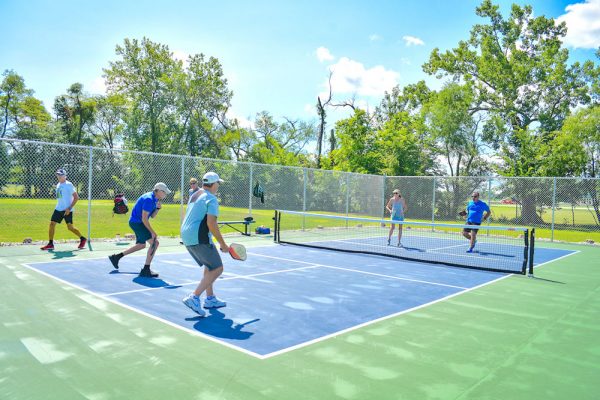 Players enjoy the new Pickleball Courts at Hopfinger Zimmerman Memorial Park recently. The courts were built thanks to a generous $27,000 donation from Don Habegger and Molly O’Neill of Catawba Island. (Photo by Sheri Trusty)

Stephanie Uhinck of Marblehead did recently what she’s done so many times this summer. She brought her children to Hopfinger Zimmerman Memorial Park in Port Clinton. Her children – and the cousins who tagged along that day – spent the day wearing themselves out in the three-plus acre swimming and fishing pond.

“We have been coming here every week. The water keeps them busy for hours, and they go home and crash,” Uhinck said. “It’s amazing here. Every time I come, I feel like they’re adding something else.”

Uhinck was right. Jack and Lorraine Zimmerman created the park to honor their late parents, and their vision of “a free, safe and beautiful space for families to enjoy” keeps getting bigger every year. This year, two Pickleball Courts were added to the park, which also features a playground, gazebo, dog park, walking trails and basketball courts, all available to use without charge.

On Saturday, July 30, several pickleball players were taking turns on the courts. 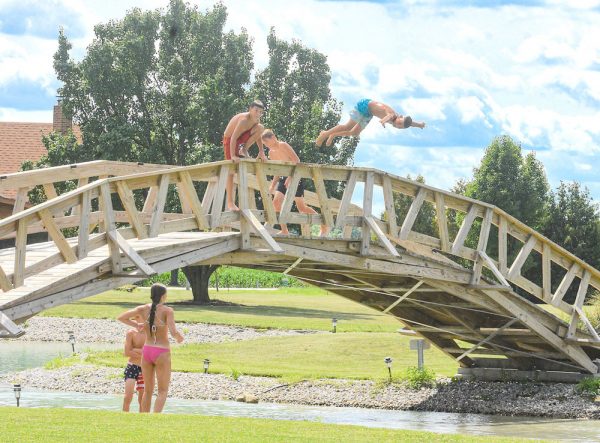 Nine-year-old Michael Fisher of Marblehead jumps off the bridge into the swimming pond at Hopfinger Zimmerman Memorial Park this summer. “We come here pretty much every week. It’s so fun. They’ve added so much to the park,” he said. (Photo by Sheri Trusty)

“The Pickleball Courts are very popular,” Lorraine said. “Had I known, we would have put in more.”

More courts may eventually be built, but for now, the Zimmermans are focusing on the construction of a 24-by-60-foot gazebo next to the Pickleball Courts thanks to a generous $27,000 donation from Don Habegger and Molly O’Neill of Catawba Island.

Construction of the gazebo, as well as a second gazebo near the north pond, is planned to begin in 2023. Lorraine said the idea for the pond gazebo was inspired by the many adults who set up canopies and grills near the pond to get away from the kid noise by the playground.

The gazebos may be Lorraine’s current mission, but it’s not the Zimmerman’s only project. Across the street, on additional park land, bulldozers are moving dirt to create a 60-foot sledding hill. The Ohio Contractors Association, whose generosity helped create the park’s road, parking lots, Pickleball Courts and basketball courts, donated the equipment and some of the labor for the sledding hill. 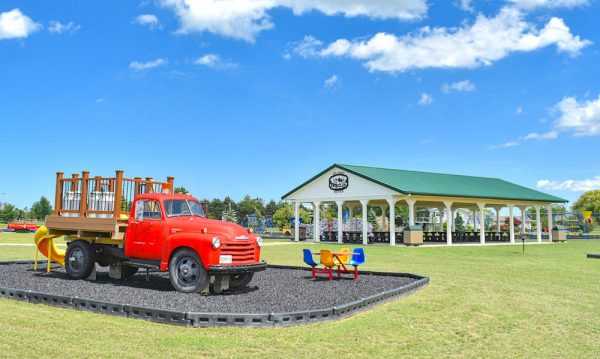 “They are digging a pond, and in 2023, we’ll add a pavilion with a fireplace by the sledding hill and a hockey-size ice skating rink,” Jack said.

The sledding hill will add another of level of excitement when the Zimmermans host Reindeer Day on Sunday, Dec. 18. The event will feature live reindeer, Santa and Mrs. Claus, a fire truck and a SWAT truck. The event is free.

The Zimmermans’ vision of a free community park was made possible by continuing donations from the community. Tackle Box 2 in Fremont is hosting a fundraiser on Saturday Oct. 1. Tickets cost $10 and include food and an entry in a bobber race. Tickets are available at Tackle Box 2 or by calling Lorraine Zimmerman at 419-467-3480.