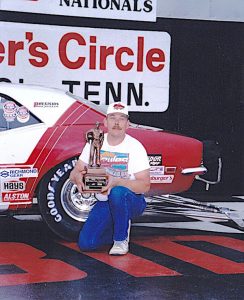 Donn Rhode, 71, of Port Clinton, died unexpectedly on Saturday, Aug. 10, 2019. Donn had open heart surgery at University Hospitals in Cleveland. While recovering, he unexpectedly suffered a life-altering stroke. He was transferred to Stein Hospice, Sandusky, where he succumbed.

Donn, “Butch”, “Rosebud”, began his journey on Aug. 28, 1947. Donn grew up and lived his entire life in Port Clinton. He graduated from Port Clinton High School in 1965 and was one semester short of his degree in Business Administration from Tiffin University.

He chose to leave college because he knew racing and engines were his love. He began driving go-karts with his father and brother when he was a young boy. Over the years, his love of all things engines only grew as did the sophistication of the engines, the racing circuits and the tracks. As his skills and talent grew, so did his success. Always present by his side was his loving wife Kim, whom he met in 1976 and married in 1987. Together they realized their dream of opening their business, Precision Engines. Donn was involved in racing because he loved everything about it. He loved gaining the technical skills, his car and his race family that was as important as any other family. They enjoyed their racing travel and the many, many friends they met along the way. The tailgate meals and the sharing of successes and challenges were their life.

Donn was preceded in death by his father, Ronald Rhode; his grandparents, Irvin and Verna (Rudolph) Rhode; his birth mother, Haroldean Crone.

Donn was baptized and confirmed in the Lutheran Faith. There will be no calling hours or service. Donn donated his body to the Cleveland Clinic so that research may gain knowledge to help others with vascular disease and polythycemia vera. There will be a Celebration of Life that will be announced at a later date where all will gather, share stories and honor him.
He will be greatly missed by his family and friends.