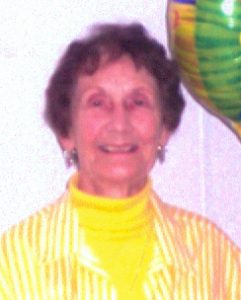 Dorothy Jean Gollihue, 93, of Lakeside-Marblehead passed away at her home on Saturday, March 21. Dorothy was born on June 15, 1926 in Salt Lake City, Utah, the daughter of the late Virgil and Florence (Burton) Corwin. Dorothy’s late husband, Harlan Gollihue was stationed at Salt Lake City and in the Navy where they met and were later married. Following the war, Harlan became a Driller and they traveled all over the United States. After settling in Cleveland, Harlan started his own drilling company, and Dorothy managed the office. In retirement, Dorothy and Harlan moved to Marblehead and Dorothy volunteered at the Magruder Hospital Gift Shop for 20 years.

Due to the current restrictions regarding public gatherings, Graveside Services will be conducted at a later date at Sackett Cemetery, Lakeside-Marblehead.

Arrangements are being entrusted to the Gerner-Wolf-Walker Funeral Home and Crematory, Port Clinton.

Please consider sharing your condolences to the family via a memorial contribution to a charity of your choice, a card, email, or message on our website at www.walkerfuneralhomes.com.