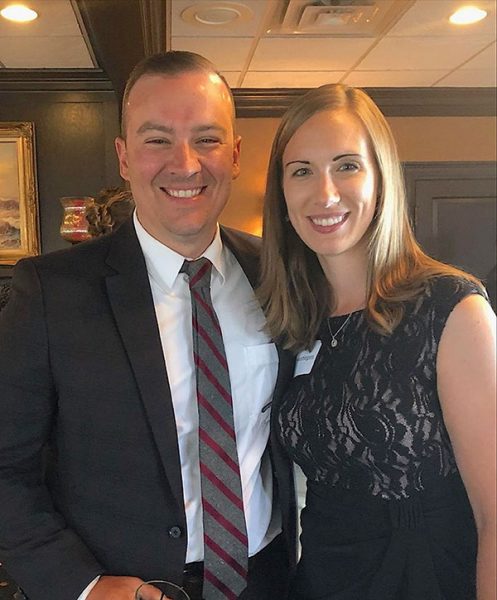 Douglas J. “D.J.” Swearingen Jr. was joined by his wife, Angela, at his swearing in ceremony on Aug. 1 at the Ohio Statehouse in Columbus on Aug. 1. Swearingen was selected to replace Steven Arndt of Port Clinton, who retired on July 31.

Swearingen, the head of the Republican Party in Erie County, received his Bachelor’s degree in Political Science from Bowling Green State University and his Juris Doctor Degree from the University of Dayton School of Law. He currently practices law with the firm Wickens, Herzer, Panza with offices in Sandusky and Avon.

“I remain humbled by and thankful for the opportunity to serve the 89th District as its representative,” said Swearingen. “Erie and Ottawa counties are truly special places to live, and I will be doing everything that I can to help these areas continue to grow and prosper.”

Ohio Supreme Court Justice Judith L. French administered the Oath of Office at the session.
Born in Fairmont, W. Va., Swearingen grew up in Columbus, Ohio. He and his wife, Angela have three young daughters, and they considered moving to the area after Swearingen interviewed for a job with his present law firm.

“When Angie and I came to visit after I was offered the job, we were blown away,” said Swearingen. “We found this part of Ohio to be an incredible place to live and work, the cost of living was affordable, and the community was simply great.”

Swearingen practices business and real estate law, generally providing legal advice to family-owned businesses and partnerships and advising on real estate transactions and developments. He enjoys running , including marathons, and playing golf. He was a baseball player in high school and college, getting tips from his father, Douglas Swearingen Sr., a star pitcher at Ohio State University who was drafted in the major leagues by the Seattle Mariners.

Arndt, an elected official for 40 years, decided last spring to retire and go sailing with his wife.
“I look forward to having more time to spend with my family and sail my boat. This summer, my wife and I will fulfill a dream we’ve had for a long time and that is to do extended sailing and eventually complete the Great Loop of North America,” said Arndt in a prepared statement.

Arndt was an Ottawa County Commissioner when he was appointed as state representative in the 89th District in 2015, replacing Rep. Steve Kraus. Arndt was elected to the post in 2016 and 2018.