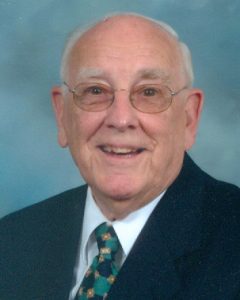 Dr. Derrill Arthur Hablitzel, 101, of Port Clinton, Ohio, passed away on Tuesday, March 17, at his residence. He was born on December 14, 1918 in Toledo, to the late Arthur William and Susan Anna (Shrader) Hablitzel.

A lifelong Ottawa County resident, Hab was raised in Rocky Ridge and graduated from Oak Harbor High School. His father founded Oak Harbor Hardware in 1927 which is still in business. He graduated from Ohio State University College of Dentistry in 1944 during the war. By that time the Army had taken over his school and all able bodied men received their dentistry diploma in one hand and their Army commission as dentists in the other. He ended his tour of duty as a captain.

On May 29, 1945, Hab married his love, Clara Lou Carstensen. He and Clara Lou lived with her parents in Oak Harbor until he bought a house in Port Clinton. Hab notes that his house was built in 1941 on the site of the old interurban rail line’s baggage warehouse. He even has photos of these tracks running by his home.

Hab has been an influential part of this community. He is a member of Immaculate Conception Catholic Church; he spent 25 years as chair of the Boy Scout Committee, 38 years on the Gordon Lumber Board of Directors, retiring in 2010; member since 1947 and Past President of the Port Clinton Rotary Club; 80 year member of the Masonic Lodge of Oak Harbor #495; Member of Magruder Hospital Board; Past Commodore of the Port Clinton Yacht Club; member of the Catawba Island Club; lifetime member of the OSU Alumni Club; member of Colonial Club; selected to attend the first Buckeye Boy’s State in Columbus in 1936 and served as Vice President of the Ottawa Co. Community Foundation; and was also the 2nd scout to attain the rank of Eagle Scout in Ottawa County.

Hab was an avid Ohio State Fan and hasn’t missed an Ohio State Home Football game since 1936, except during World War ll, and last year. All in all it totaled 75 seasons as a faithful and devoted Buckeye.

He was preceded in death by his parents; his wife; brothers, Corwin Hablitzel and Carol Hablitzel; and a sister, Marguerite Hersberger.

Due to the ongoing concerns regarding the coronavirus, a Private Funeral Mass will be celebrated at Immaculate Conception Catholic Church for immediate family members only. A Celebration of Life Memorial Service will be held at a later date when all can attend.

Hab’s family suggests you leave an online condolence at www.walkerfuneralhomes.com

A Special Thank You to Hab’s caregivers: Christina, Patty, Marcella, Jrene, Logan, and Sherry, as well as to Dr. Sandy McLean, and Stein Hospice for all their loving care.