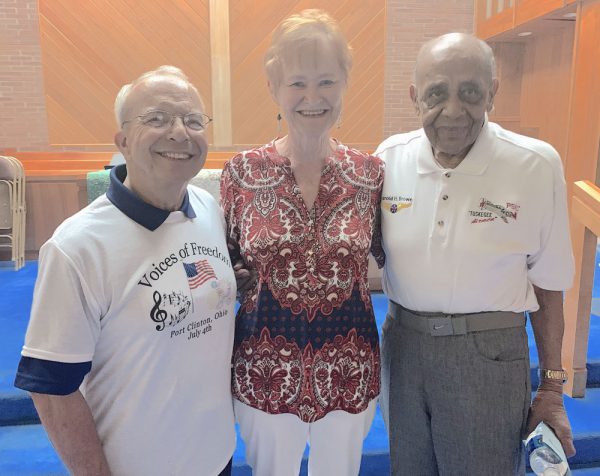 Following a rousing and patriotic evening of song at the Voices of Freedom Concert at Trinity Methodist Church in Port Clinton, Choir Director D. Gregory Fox focused on Tuskegee Airman and World War II hero Dr. Harold Brown of Catawba Island, who attended the concert with his wife, Marsha Bordner.

“As famous as the Tuskegee Airmen are today, these pioneering aviators endured decades of unjust racial prejudice and mistreatment, even as war heroes returning home. These men, through their superlative service during World War II, paved the way for the desegregation of the military and for the Civil Rights movement of the 1960s,” said Fox. “Dr. Brown’s time in the education system and his life experiences serves as an example to all of us of how one can persevere in a world not friendly or accommodating to their dreams.”

Fox explained that Dr. Brown was a Minneapolis native, an original Tuskegee Airman who flew with the famed 332nd Fighter Group in World War II, our country’s first African American military pilots. He was born in 1925 and grew up in Minnesota. When he graduated from North High School in 1942, he enlisted in the military with the goal of becoming a pilot, a dream of his since the sixth grade.

During his time in combat, Dr. Brown completed missions strafing targets on the ground and protecting bombers in the air. On his 30th mission, he was shot down over Linsz, Austria, bailing out of his badly damaged P-51 fighter and being taken as a prisoner of war.

Dr. Brown served his country for 23 years, retiring in 1965 with the rank of Lieutenant Colonel. He is experienced in 20 different military aircraft, and held a post at Strategic Air Command during the Cuban Missile Crisis. Dr. Brown went on to earn a Ph.D., retiring from Columbus State Community College as Vice President of Academic Affairs. His many successes after the war illustrate his passion for education and community service, which he has carried with him to this day.

“To keep the story of the Tuskegee Airmen alive for the next generation, Harold and his wife, Marsha Bordner, wrote “Keep Your Airspeed Up: The Story of a Tuskegee Airman,” said Fox.

“Harold, we thank you for your service!”