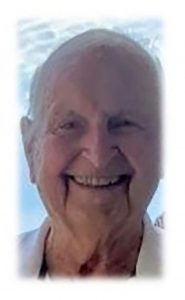 Dr. John P. Knapp passed away on Thursday, Aug. 13, after becoming ill with the Coronavirus. He was preceded in death by his wife of 57 years, Rita M Knapp. He is survived by his four children William (Mary) Knapp, Cynthia (James) Mayer-Passarelli, Thomas (Ann) Knapp and James (Marisol) Knapp, and his beloved grandchildren Michael, Christopher, Rita, Kevin, Timothy and Emma. He leaves behind many friends and his dining and dancing partner of the last several years, Gloria Lucas Bidinger.

John honored his country serving in the United States Navy. He completed his undergraduate studies at The University of Steubenville and received his DDS from the Georgetown University Dental School in Washington, DC. After practicing general dentistry for many years, he completed the Endodontics program at The Ohio State University and opened the first Endodontics practice in Canton. In addition, he taught at Case Western Reserve’s dental school for several years while also maintaining his practice. John never really stopped learning throughout his life and had an inquisitive and open mind.

He enjoyed spending time with family and friends more than anything. He also loved to be fishing on Lake Erie, flying his airplane, and dancing the night away. He was involved in the startup of The Liberty Aviation Museum and the building of the Ford Tri Motor, both of which are located at the Port Clinton Airport.

John made the most of every day, and mixed one of the best Manhattans anywhere. There isn’t enough room here to mention his many, many hobbies and interests or to expand on his storytelling skills. His was a life well lived, and he was truly an inspiration to all who knew him.

Online condolences may be shared with the family at www.neideckercrosserpriesman.com. Funeral arrangements will be held at a later date, Neidecker, Crosser & Priesman Funeral Home & Cremation Services will be handling the arrangements.