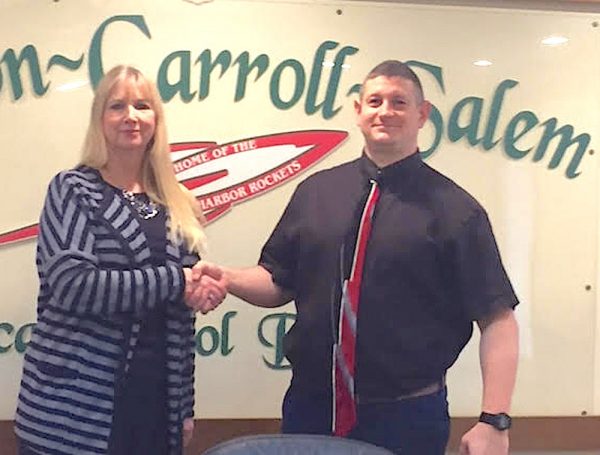 Dr. Guy Parmigian, the superintendent of Benton-Carroll-Salem Schools, recently accepted a teaching position in the Teacher Education Department at Madonna University in Livonia, Mich. that he will begin in August. Until then, he will finish out his tenure as B-C-S superintendent and work to help bring in his replacement.

A major accomplishment during his time serving as the district superintendent was the passage of a 3.9 mill levy that passed in November by a margin of 1,993 to 1,946 (50.6%-49.4%). The levy will generate $1.5 million per year for the next five years. It was an important piece of legislation that will help the school, which was in a financially precarious situation following the devaluation of Davis-Besse.

I had the chance to sit down and talk with Parmigian to get some of his thoughts on his time in Oak Harbor and what his experience was like working as the superintendent.

How would you describe these last eight years working at Benton-Carroll-Salem Schools?
It’s been a real privilege and an honor. I’ll always consider it one of the honors of my life. I’ll always be a Rocket. You don’t spend eight years somewhere and not feel a connection to the people. BCS is fortunate to have some people that work hard for the school, and parents that make it a very special place.

The vacancy that I’m leaving will attract some world-class talent. We have a great board (of education), and some great academics to build upon. The school district is in good shape.

How important was it to get the final levy passed?
It was huge. It really ended up being (a situation) where our voters voted for an increase in their property taxes. The staff felt like it was a vote of confidence (because) of the great things they’re doing. The devaluation of Davis-Besse was a 25% cut to our budget, (and) there was no way we’d be able to cut our way out of it. I would point first and foremost to our teachers going door to door, putting signs out and making phone calls. I think of (Oak Harbor softball coach) Chris Rawski, who isn’t a teacher for us, offering to help and we had him go door to door. Kathy Bergman, the president of our union, and Rhonda Martin, our union vice president, organized our teachers (to campaign). You look at a guy like Aaron Avery, who chaired our last campaign, and then there’s Arlyn Bensch. He’s a guy in the community who is always there for you, and does whatever we ask of him.

I think it’s a huge step (forward). We’re in a great place to take the next step in building BCS to being one of the elite school districts in the state. The new superintendent will help to set that vision. We don’t ever want to be complacent. I think maintaining the status quo is not something we want. How are we going to improve the needs of kids?

I can’t speak higher of (BCS treasurer) Cajon (Keeton). He’s very savvy, very intelligent, he’s a colleague and a friend, (and) he always had the best interests of kids at heart. We worked to keep costs in line and be fiscally conservative. That meant looking at every expense and analyzing it. Our payroll in 2012 was around $9 million; by 2018, it remained around $9 million; 70-80% of the district’s expenses are payroll, so to keep our salaries flat while improving (as a school district) was a (testament) to everyone because people were asked to do more for the same pay. We were able to make these cost-cutting efforts.

As I sat down with people, and they told us to keep doing what you’re doing, keep trying to do more with less to the extent you can. It shows that you are valuing their tax dollars. Oak Harbor is not an extremely wealthy area like Ottawa Hills or Perrysburg. We have a lot of middle-class, blue-collar folks. We try to make sure we spend our dollars wisely.

Cajon will do a great job serving our district long term. The board will, too. Ultimately, it comes from our five board members. They are a very diverse group of people who are extremely savvy that bleed red and green, (and) always have the best interests of the district at heart. I think the next superintendent will have those same qualities.

What kind of feedback have you gotten from people with respect to the levy passing?
The feedback to me personally is thank goodness it passed. A weight has been lifted off everyone’s shoulders. It’s like a huge elephant was standing on our chest. Now we can go get back to the business of helping our students. How can we make our programs better? That’s what we’re paid to do as educators.

Could you talk about how schools are the hubs of small towns and the importance BCS plays in the community?
Schools are the anchor of the community — athletics, music, it’s academic-type things that go on, FFA banquets and more. We’re the hub of the community. I was just recently at school during the weekend and there were a few teachers in the classroom, and I saw Coach (Mike) May’s truck at the high school. That says something about our staff. We understand (our place in the community), and we value that.

How did you find out about the position at Madonna University?
It’s something I’ve wanted to do for probably 20 years, to teach in higher education. I was told by some of my mentors that I needed to get experience working in schools. I’ve had some tremendous experiences as a teacher, an administrator and as a superintendent.
It’s certainly a risk going from K-12 to higher education. I’m going from being in charge to a person who is going to be the low man on the totem pole. It’s almost like starting over. It’s challenging, but it’s something I’m excited about, proving myself in another venue.
Madonna is a small, close-knit community. I got a great vibe from the faculty there. That swayed my decision, there are some really dedicated folks (in the department).
I’ll always be a Rocket, I told the board I will be happy to help with the transition.