Dream run ends one spot short of the state finals 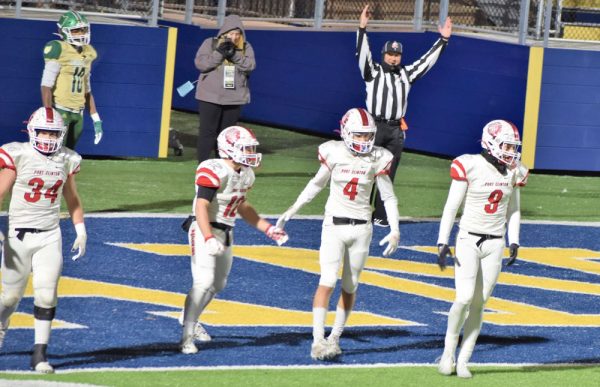 A tipped pass and an end zone catch by Josh Hurst (4) gave Port Clinton its first touchdown against Youngstown Ursuline in the opening quarter of the Division IV state semifinal last Friday. From left to right are Garrett Cornell (34), Owen Auxter (12), Hurst and Colton Yarbrough.

EUCLID — Port Clinton clearly showed it could play with Youngstown Ursuline. But ultimately, the Fighting Irish’s offensive attack, and running back DeMarcus McElroy in particular, were too much for the Redskins to handle in a 34-17 loss in a Division IV state semifinal.

Port Clinton (13-2) led 17-15 with 1:51 remaining in the third quarter following a 20-yard field goal by Andrew Hanson, but the Irish scored 19 unanswered points via three touchdowns to take control of the game.

Hanson’s field goal, which came off a 13-play, 57-yard drive and took 7:18 off the clock, was quickly answered by the Irish. They drove 67 yards in four plays exactly one minute later, scoring on a 42-yard touchdown run up the middle by McElroy to make it 21-17, but the two-point conversion failed.

From there, the teams traded possessions and the ‘Skins took over at their own 47-yard-line midway thru the fourth quarter. After gaining six yards in two plays, Port Clinton faced a third-and-4, but a screen pass to Garrett Cornell was blown up and lost seven yards, forcing a punt.

McElroy, who ran for 261 yards and five touchdowns, then caught a 55-yard screen pass to set up his fourth touchdown, a 2-yard run, taking the lead from 21-17 to 27-17, effectively putting the game away.

McElroy closed the scoring with a 74-yard touchdown run with 2:35 remaining.

It was a great effort by the ‘Skins, but they came up a little short.

“We got off to a bad start. The opening kickoff was mismanaged, and we had poor field position all night. Yards-wise, we weren’t terrible, we had about 285 yards of offense. We scored 17 points, but that’s not enough,” said Port Clinton coach Beau Carmon. “I thought our defense played outstanding. They gave up a few big plays.

“We played a team that was better than us. We played a very good football team and we made mistakes that at times were costly. We didn’t play well enough offensively, and gave up too many plays defensively. You have to be perfect to beat a team like that.

“I’m real proud of our kids. It says a lot about the character of this team that we came back and took the lead on them.”

After falling behind 15-0 in the early stages of the game, Port Clinton responded by scoring two touchdowns in the second quarter.

Facing a second-and-goal at the Ursuline 4 early in the second quarter, quarterback Cam Gillum threw a pass to Colton Yarbrough that was tipped by an Ursuline defender and caught by Josh Hurst for a touchdown, and Hanson’s extra point cut the deficit to 15-7. And with a little over two minutes remaining, Gillum scored on a 6-yard run, and the ‘Skins went into the half down 15-14. 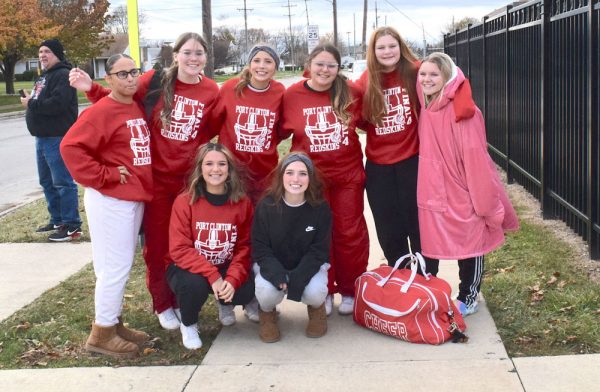 Excited cheerleaders at Bassett’s Field at True Lay Stadium get ready to travel to Euclid Community Stadium to root for the Port Clinton Redskins in the Division IV state semifinals. (Photo by D’Arcy Patrick Egan)

In terms of talent, the Irish had Port Clinton beat, but not by much. A group like Gillum, Cornell and Hurst, among others, can hang with the best. But the ‘Skins had seven players going both ways.

“One of our problems was our depth, we had too many kids going both ways, and they did not,” said Carmon. “You’re only going to get so far with that. We made a tremendous run with the team we had, and it says a lot about the heart of our kids. Only a couple of their skill guys went both ways.”

It was quite a season for Port Clinton, which won a league title, a regional championship, and 13 games, the latter two being school records.

“We met every single goal that we wanted to meet. We won two championships, and you can only win three in a year. Two out of three is not bad,” said Carmon. “It had never been done before at Port Clinton, and I’ll take it.”