Drusbacky honored for 50 years of coaching 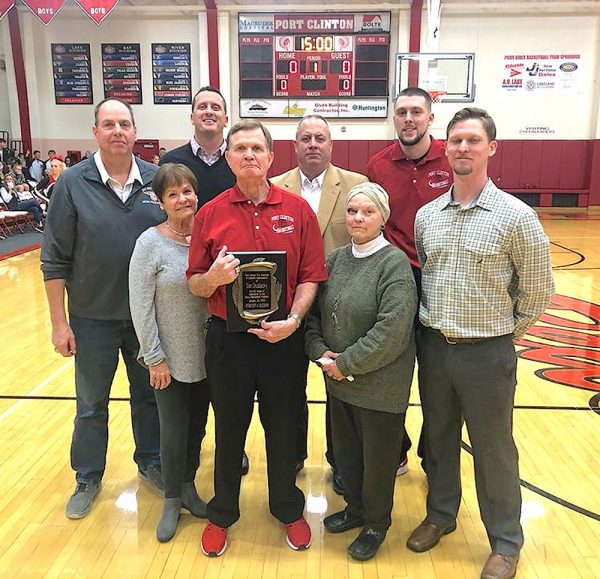 Through all of the changes and the ups and downs, the passing of Tom Bodager, the league championships and the state runner-up finish in 2010, Don Drusbacky has seen it all. The Port Clinton assistant basketball coach, who has been a member of the staff for five decades, was honored for his 50 years of service before the Port Clinton-Perkins game on Saturday.

On hand for the surprise event were former head coaches Gregg Hedden, Troy Diels and Von Graffin, plus Ryan Hicks, who is in his first year at the helm. It was a special event that was organized by superintendent Pat Adkins and athletic director Rick Dominick.

Drusbacky, who graduated from Port Clinton in 1964, began coaching under Jim Robinson, and then Bodager, who had two separate tenures as the head coach, took over. Dave Link coached in between Bodager’s tenures, followed by Hedden, Diels, Graffin and Hicks. One of the toughest experiences came in ’97 when, Bodager, the most decorated coach in school history, died from cancer and Drusbacky was forced to take over and finish the rest of the season.

Hicks, who played for and is now coaching with Drusbacky, talked about his role within the program. “Coach Druz means the world to everybody, he means the world to me. He’s one of my favorite coaches, (and) getting to know him from a coaching perspective has made our relationship even stronger,” said Hicks. “I think he’s coached every 1,000-point scorer at Port Clinton. I don’t think there’s ever been a situation that he hasn’t seen. Being able to just pick his brain about certain things is huge for me as a first-year coach. He has a high basketball I.Q. Whenever I have a question or I’m struggling with something, he never hesitates to help me. The kids love him, and they understand all he does for him. They show him respect and appreciate him. He’s somebody who doesn’t say a ton, but when he does say something, it holds a ton of weight. He’s been around the game longer than any of the coaches. Anything that comes out of his mouth is going to be good information for everybody. When he talks, people tend to be quiet and soak it up. I know I go to him a lot when I have things going on.”

During Drusbacky’s tenure, the Redskins have had tremendous success, winning 11 Sandusky Bay Conference titles and 13 sectional championships. A special experience came when Drusbacky got to coach his son, Chris, as the team won back-to-back SBC titles in 2002 and ’03. The high point came in ’10 when Hicks, Josh Francis, Cory Brown and Allen Tigner led Port Clinton to a Division II state runner-up finish. Graffin, a ’79 graduate of Port Clinton, coached the team for the last five years before Hicks took over. Graffin was a student of Drusbacky’s, who taught history, and coached with him, too. “He did a lot of things behind the scenes that aren’t noticed (like) being there early, staying late and keeping stats, and our uniforms were always taken care of,” said Graffin. “When Don was sick for two weeks two years ago, things started falling apart. When he was gone for those two weeks, he actually realized all that he did for us (like) keeping track of timeouts, matchups and managing a game.”

Graffin talked about the role Drusbacky has played in the community. “First of all, he loves Port Clinton. He went to Miami (Ohio), he could’ve been a graduate assistant for Bo Schembecher, who coached there at the time,” said Griffin. “He married a Port Clinton girl, he’s a Port Clinton guy. He knows all the families, all the kids, he knows how tough people are. He loves Port Clinton and the way to give back was to do