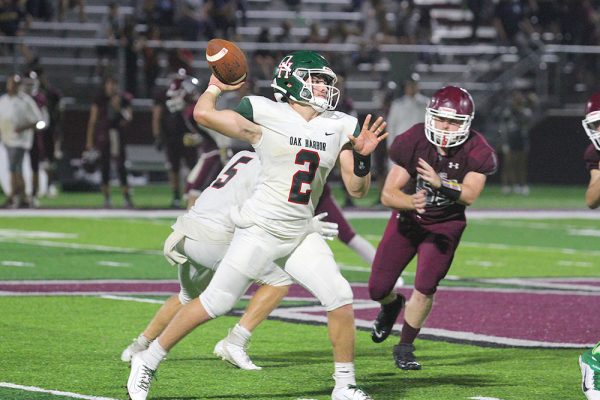 When it wanted to, Oak Harbor was able to run at will against host Rossford, rushing 35 times for 340 yards and four touchdowns in a 35-0 victory.

Quarterback Jac Alexander ran 14 times for 200 yards and three touchdowns and completed 8-of-12 passes for 78 yards and another score. Running back Clay Schulte carried the ball 17 times for 135 yards and a touchdown and caught five passes for 56 yards. The duo accounted for 469 yards of total offense and five touchdowns.

The first touchdown came at the 7:49 mark when Alexander scored on a 25-yard run, and the first of five extra points from Caleb Heintz made it 7-0. Schulte then scored on a 1-yard run with 11:26 remaining in the second quarter and the two alternated three more touchdowns.

Oak Harbor coach Mike May was pleased with his offensive line for opening up holes for Alexander and Schulte.

“The offensive line did a great job picking up all the blitzes, they were bringing at least two linebackers on every play. The line did a good job of picking that up and opening holes for Clay and Jac,” said May. “Our offensive coordinator Scott Schulte did a nice job calling the game. They play man coverage and that opened things up for us.”

The Rocket defense held the Bulldog passing attack in check. Rossford (2-1) put up 61 points in the first two games but were held scoreless by Oak Harbor (3-0).

This Friday, Oak Harbor travels to Toledo to face Woodward, which is coming off a 36-20 loss to Bowling Green. The Polar Bears are currently 0-3.

“They’re very athletic, they have a tailback that we’re very impressed with, and a nice group of wide receivers,” said May. “Defensively, they have a nice group of players. We have to tackle well. One of the things I was a little disappointed in was we missed some tackles against Rossford.” 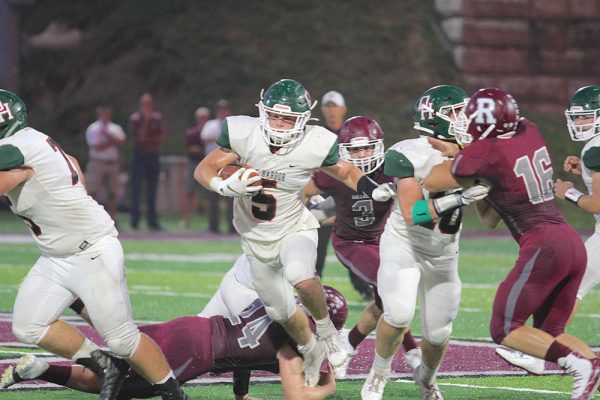 Rockets running back Clay Schulte caught five passes for 56 yards and carried the ball 17 times for 135 yards as Oak Harbor coasted to a 35-0 victory over Rossford. (Photo by Julie Overmyer)