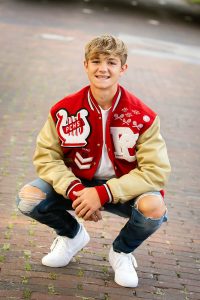 Port Clinton High School’s Elliot Auxter, an accomplished young man who achieved the rank of Eagle Scout in Boy Scouts this year, was selected to be in the Senior Spotlight for February.

Auxter has been a very busy student, which includes his Eagle Scout project that refurbished the City Hall lobby. He also has been involved in a variety of student groups and athletics at Port Clinton High School.

Auxter received the Kiwanis Scholar Athlete Award during all four years of high school and named to the SBC All-Academic Team. In 2019, he was part of Port Clinton’s SBC Championship Boys Tennis team.

Auxter is also involved in Port Clinton High School Leadership Council, National Honor Society, and is a Freshmen Mentor. Auxter plans to continue his education, currently visiting colleges and universities in order to make a final decision. He is the son of Kim and Angie Auxter.