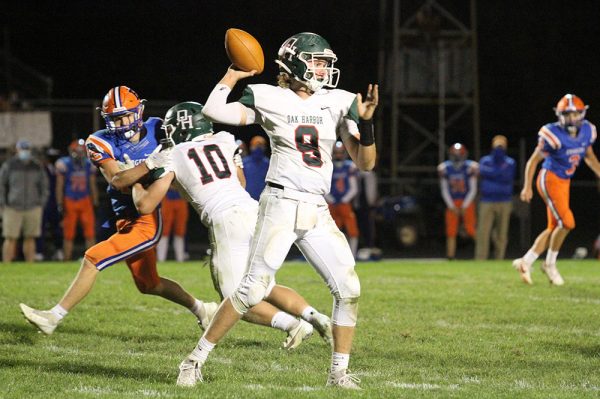 MILAN TWP. — Oak Harbor led for the vast majority of its game with Edison, but the Chargers made some key plays late in the game to rally and defeat the Rockets, 22-16.

Holding a 16-14 lead with 5:30 to play in the game, Oak Harbor (1-3, 1-2) faced a fourth-and-12 at the Edison 28-yard-line. Quarterback Ashton Schroeder dropped back to pass and couldn’t find anyone, so he decided to run for it. Schroeder gained 11 yards before Thomas Simon and Garrett Scott tackled him at the 17, just one yard short of the first down.

Edison (3-1, 2-1) took over, scoring the go-ahead touchdown on a 1-yard run by Simon with 1:01 to play. It finished off a long drive as the Chargers traveled 83 yards in eight plays while eating up 4:17 of clock. The first play of the drive was a wild one as Clay Byington took a pitch from Simon before racing down the right sideline and fumbling the ball after a 45-yard run. But Scott recovered it at the Oak Harbor 27. 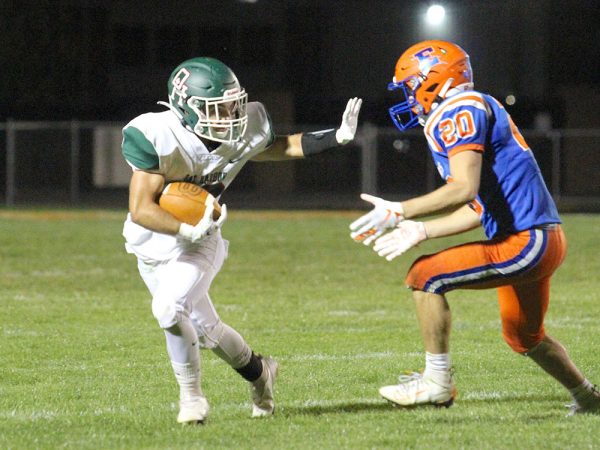 Running back Gannon Duty and the Oak Harbor ground game made the difference early against Willard, but the Chargers rallied in the fourth quarter to notch a 22-16 victory over the Rockets. (Photo by Julie Overmyer)

In the first half, Edison lost two fumbles and turned the ball over on downs twice. In the second half, the Chargers had better luck, recovering three of their own fumbles.

“It kind of felt like a tale of two halves. We dominated in the first half, and we felt pretty good about where we were. Coming out of halftime, we always stress trying to score or prevent a score,” said Oak Harbor coach Mike May. “They scored, and it took the momentum away from us. Cade Petersen kicked a long field goal, and we got down deep in their territory on our next drive, but couldn’t score. We gave them an opportunity to win and they took full advantage of it.”

Another huge play came on the first play from scrimmage in the third quarter. With the Chargers facing a first-and-10 from their own 20, Simon faked a handoff to Aiden Hayward before pitching it left to Scott. The Rockets were completely fooled as all 11 defenders headed for the pile and Scott raced 80 yards untouched down the left sideline to score. The first of two extra points from Jaime DeLeon were good, and Edison was back in business, down, 13-7.

“The thing with Edison is, we knew going in, we have to be assignment sound. All 11 players have to take care of their assignment,” said May. “That’s what happened at the beginning of the second half on that touchdown. That last drive, there were a couple major breakdowns and some missed tackles. That allowed them to go down and score.”

In the first quarter, the Rockets were forced to punt after the game’s first drive, but Oak Harbor’s defense held Edison on fourth-and-1 from the Rocket 43 when Simon was tackled by Ryan Ridener for no gain. 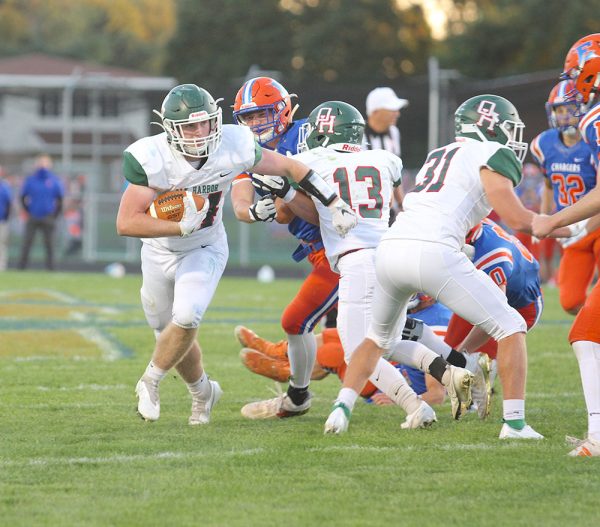 Then Oak Harbor drove 57 yards in 13 plays, converting two third downs before Schroeder executed a play-action fake on fourth-and-2 from the Edison 13 and found Ridener wide open in the end zone. Petersen’s extra point was good, and the Rockets had a 7-0 lead.

Things got worse for the Chargers as Petersen’s kickoff hit an up man and Dylan Schiets recovered the ball at the Edison 44. Oak Harbor drove 56 yards and scored when Schroeder found Hayden Hower on an out route from 13 yards out, but the extra point was blocked, leaving the Rockets with a 13-point lead.

It’s been a tough stretch for the Rockets, who have been competitive in every loss this season, all of which have come against stout competition.

“In our three losses, we had a chance to win those three games,” said May. “Against Bellevue, there were a couple plays; against Huron, we had the punt return for a touchdown and a pick-six. We just haven’t been able to close things out. I’m proud of the kids, I’m definitely proud of the way we’ve been handling adversity.”

It was the final game of Schroeder’s football career as he broke his left arm in the game, ending his season.

“He’s having surgery. He’s a really good baseball player, so he should be ready for that season,” said May. “We wish him the best, it was definitely a big loss. Cade Petersen will step in at quarterback.”

The Rockets travel to Willard (0-4, 0-3) to face the Crimson Flashes on Friday.