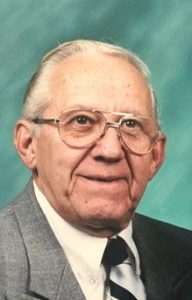 Edward served in the US Army, Signal Division, from 1958-64 and received the rank of SP/4. He was stationed in Germany two years. He worked at Controls Corporation for 14 years and then as a maintenance mechanic at Uniroyal for 30 years where he received his journeyman’s card. Edward was a master craftsman and very mechanically inclined, teaching these talents to his children. He had a love for flying and got his pilot’s license when he was 16. One of his favorite events was attending the Indy 500 race with his dad, brothers, sons and nephews as an annual tradition for over 20 years.

Edward was a member of St. Paul’s Lutheran Church, Oak Harbor, where he served on church council. He was also a member of Farm Bureau Clod Busters Council.

Visitation will be held from 2-8 p.m. on Wednesday, Aug. 17, at Robinson-Walker Funeral Home & Crematory, 165 E. Water Street, Oak Harbor. Funeral service for Edward will be conducted by Pastor Cheryl Wessel at 11 a.m. on Thursday, Aug. 18, with visitation starting at 10 a.m., at St. Paul’s Lutheran Church, 9789 W. Oak Harbor SE Road, Oak Harbor. Interment will follow the service at Roose Cemetery in Salem Township, with military graveside services conducted. Memorial donations may be given to St. Paul’s Lutheran Church or ProMedica Hospice. Online condolences may be shared with the family at www.walkerfuneralhomes.com.