Elegant dining is signature of the Hotel Lakeside Dining Room 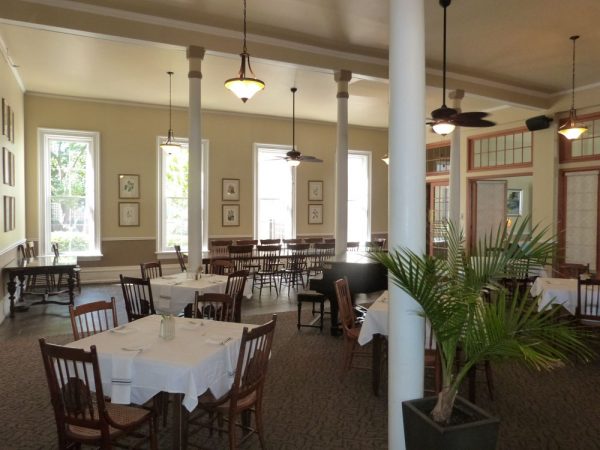 The Hotel Lakeside, built in 1875, is reminiscent of another, simpler time. A beautiful wrap-around porch showcases some of the best views of Lake Erie. Inside, the Victorian architecture and antique furnishings create an atmosphere of a bygone age.

The Hotel Lakeside Dining Room is an experience unto itself, but if you wish to enjoy a meal there you had better hurry. The restaurant will soon be closing for the season. It is open from Memorial Day weekend through Labor Day weekend.

Originally, there were 77 rooms with no running water or electricity and a two-story outhouse located in what is now the present courtyard. Over the years, additions included an east wing along Maple Avenue, electric lights and public baths and restrooms. In 1914, the front porch was enlarged and a concrete floor was installed, along with a fireplace in the lobby.

In 1955, the Lakeside Association acquired management of the hotel, and the lobby and rooms were updated with new wallpaper, rugs, mattresses and plumbing. Over the years, the hotel was poorly maintained, and by 1973 more than half of the rooms were unusable. It was decided to tear down the structure and replace it with a motel or restaurant, but the demolition and new construction never materialized. Lakeside’s Board of Trustees changed course and resolved to save and preserve the hotel, and the Friends of Hotel Lakeside was founded.

Since that time, there has been a dedicated effort to preserve and upgrade the facility. The most important improvements have included complete rewiring, new plumbing, installation of a sprinkler system, elevator access, new kitchen, foundation repair and restoration, and air conditioning of the lobby and all of the guest rooms and the restaurant. 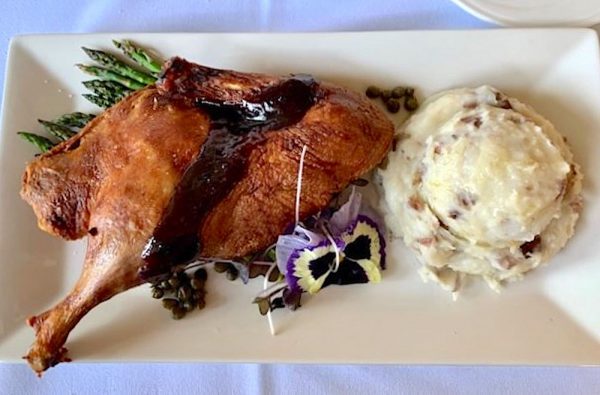 A sumptuous half duck, roasted to perfection and drizzled with a Blackberry Dejon reduction, covers the plate, barely leaving enough room for the fresh flower garnish and mashed potatoes with diced skins.

Walking into the lobby is like stepping back into a slower, quieter time. It has been restored to all of its Victorian glory. Alabaster pillars hold up the 15-foot high vaulted ceiling, and original oak trim is everywhere. Period piece furniture fills the lobby. The patina of age, well kept, engulfs you.

In the dining room, a baby grand piano dominates the room, and guests are seated on the original chairs from 1875. Only the seats have been re-caned. A large grouping of picture windows dominates the North wall and, if you are lucky enough to snag a seat at one of the tables there, you have a panoramic view of the grounds, docks, and the occasional Chris Craft or Lyman wooden boat passing by on the blue-green waters of Lake Erie.

Chef de Cuisine Stacy Maples runs not only the restaurant, but the hotel and Slack House, an historic cafe in Lakeside. She is a graduate of the Cordon Blu college of culinary arts in Atlanta, Ga., but her style might be best described as Americana with a French influence.

The Hotel Lakeside Dining Room menu items range from filet mignon, to a lobster bowl, roast duck with a blackberry dejon reduction, and Lake Erie perch. Each dish comes to the table with a fresh edible flower as garnish.

The servers wear period correct clothes, topped with a scally cap, a rounded cap with a small stiff brim in front. Maples, an Ohio native, takes great pride in in the sumptuous food, and how the meals are served.