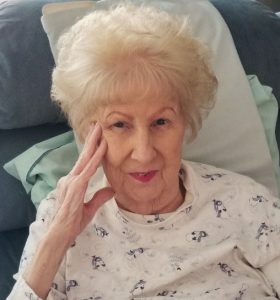 Elizabeth “Betty” Frances (Lasher) Rodwancy, 94, a long-time resident of Catawba Island, passed into the healing arms of the Holy Spirit on March 28. Betty was born on Dec. 5, 1927, in Great Neck, N.Y., to the late Harold and Elizabeth (Dieneman) Lasher.

Betty was a secretary at the United States Merchant Marine Academy, where she met her husband, the deceased Robert (Bob) Rodwancy. After they married and relocated to Ohio, she was a homemaker until her three children were grown. Betty then worked for several companies including Shan-Rod in Berlin Heights and Uniroyal in Port Clinton, before moving to a position at Bay Point Resort & Marina in Marblehead, where she retired from when she was in her mid-70’s. Betty was a member of Immaculate Conception Catholic Church in Port Clinton. In her spare time, she loved being with her family and friends. Her hobbies included watching TV (she never missed her soap operas,) word search puzzles and playing cards.

A Memorial Mass will be held June 4 at 11 a.m. at Immaculate Conception Catholic Church, Port Clinton. A Celebration of Life will follow – location to be announced. In lieu of flowers, memorial donations may be made to Immaculate Conception Catholic Church, 414 Madison St., Port Clinton, OH 43452 or ProMedica Hospice, 907 W. State St., Fremont, OH 43420. Condolences may be shared online at www.grofffuneralhomes.com.