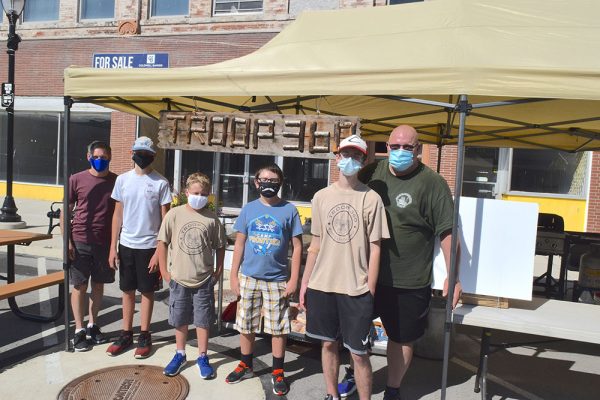 The rank of Eagle Scout is the highest achievement a young man can achieve from the Boy Scouts of America, and Elliott Auxter recently added another Eagle Scout to the ranks of Port Clinton’s Boy Scout Troop 360, which already has an impressive history.

“I asked Mayor Mike Snider of Port Clinton, who has been close to our scouting programs here, for suggestions,” said Auxter. “Mayor Snider pointed out that the lobby of Port Clinton City Hall really needed to be upgraded, and I started making plans.” 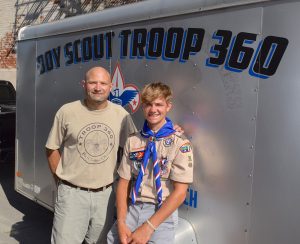 With help from a handful of fellow Boy Scouts, Auxter planned a project that included removing ancient wall paper, painting walls, replacing outdated plants outside and reupholstering chairs in the lobby.

“When we were done with the project, there really was a feeling of satisfaction for all of us doing the work,” said Auxter. “To be honored for our efforts, that was really great.”

Auxter is heading into his senior year of high school, and runs cross country in fall, plays basketball in winter and tennis in spring.

Kim Auxter, who was a Cub Scout leader for 16 years before moving up to leading Boy Scout Troop 360, has encouraged the local Scout Troop to get involved, and take full advantage of the scouting adventures to be enjoyed.

Boy Scout Troop 360 and an army of other scouts in the region will miss out on the huge Put-in-Bay Jamboree campout on Sept. 11-13 in the shadow of the Perry Monument. It is an event that annually draws more than 1,200 kids, but has been cancelled because of COVID-19 restrictions.

Kim Auxter and his Boy Scouts still have fond memories of past scouting adventures.

“One of our best trips was a memorable Florida Keys Base Camp,” he said. “Some of the Scouts enjoyed sailing adventures, while my troop had an island adventure. We unloaded all of our gear off the boat about 300 yards from shore for the six-day camp, and had to wade to the campsite in shark-infested waters with all of our gear. The deep sea fishing and snorkeling trips were great.”

Scouting has made a big difference in his life, said Elliott Auxter, especially in a small town such as Port Clinton.

“You become good friends with your fellow scouts, and the adventures are both entertaining and instructional,” he said. “You learn a lot about what’s right and wrong, and have the chance to give something back to the community.”