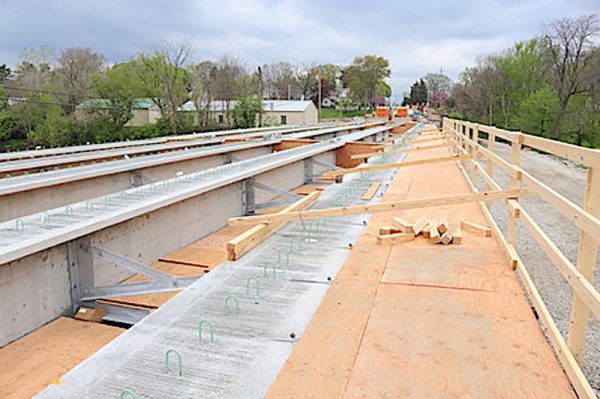 The new beams were in place right on schedule recently, with five beams put in place in a single day. A bridge span is the distance between piers, with the Elmore Bridge a three-span bridge.

The Village of Elmore will be a wonderful place to visit on a weekend adventure quite soon, with the new Elmore Bridge crossing the Portage River in the little town quickly heading toward reopening in August, with completion in the fall.

A tribute to the designer of the original bridge is included in the project. A granite base displaying the bronze plaque honoring David Henry Overman will be placed in Harry Witty Park in Elmore. Overman designed the bridge during his first year with the Ohio Department of Highway’s bridge bureau. 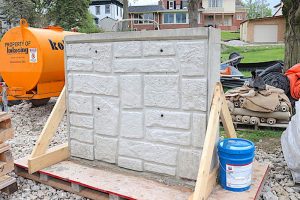 The Elmore Bridge’s ashlar stone pattern was chosen by the people of Elmore, and a concrete form line was used to create it. The test section in the photo will be stained to ensure the entire bridge is the right color, and mimic natural rock with grout lines.

The $5.4 million project by the Ohio Department of Transportation began by closing the bridge on March 16 and removing it. Vehicle traffic had to be detoured onto State Route 51, U.S. 20 and State Route 105 back on to State Route 51.

Bicyclist and pedestrian traffic has been detoured onto the North Coast Inland Trail. There have been additional closures of State Route 51 between Rice Street and the bridge, and between State Route 105 and the bridge.

Now that warm weather has made the scene in Ottawa County, kayakers and others traversing the Portage River are reminded that no boating of any kind is permitted through the project area. Boaters are directed to detour in Woodville or at River Bend Park. Signs placed on buoys at these points clearly denote where to exit.

There were no lost days due to weather on the Elmore Bridge project in April, a significant difference over last spring’s conditions. Drainage work on the north end of the bridge is complete and the base of the roadway is ready for asphalt. On the south end, both the drainage and base for the roadway are to be completed. Work to form the bridge deck is currently under way.