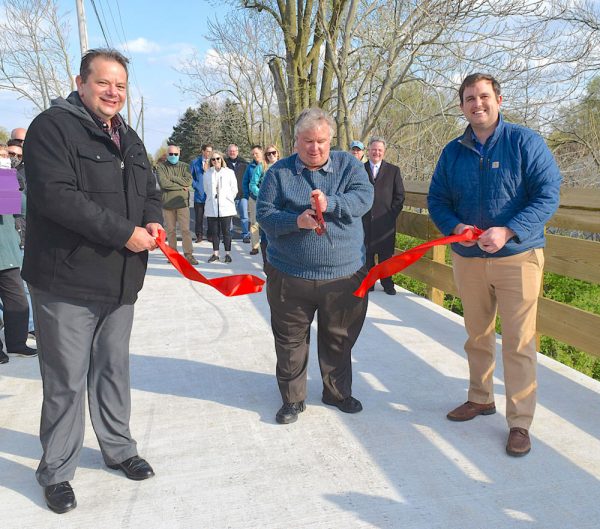 A driving force for the Village of Elmore for decades had been Mayor Richard “Rick” Claar, a tireless city official who suddenly passed away on Nov. 29. Pictured with Elmore Council President Thomas Jackson, left, and Genoa’s Mayor Thomas Bergman, right, Claar cuts a ribbon on a biking and hiking trail from Elmore to Genoa. Elmore officials had converted an antiquated railboard bridge into a recreational overpass of the scenic Portage River. (Photo by D’Arcy Patrick Egan)

The Village of Elmore will abandon outdated existing water wells and water treatment facilities, which have long been in poor condition, and create an all-new fresh water system, thanks to a $2 million state grant from the state’s BUILDS funding.

The grant will extend 4.38 miles of water transmission from the existing Ottawa County Regional Water Distribution System starting at the Harris Township water tower and extending it west to the Village of Elmore’s existing water treatment plant.

Ottawa County Commissioner Mark Stahl said the extension of regional water distribution will provide future cost savings to both the village and county customers, and promoting further manufacturing development in nearby Eastern Wood County that will provide high-paying jobs in the villages in Elmore, Oak Harbor and Genoa in nearby Western Ottawa County.

The Village of Genoa also received $1.2 million in first-round BUILDS funding to improve sanitary pump stations that must be replaced.

First Solar, a U.S. leader in manufacturing solar panels, has also announced it will invest $680 million to fund construction of its third U.S. manufacturing facility in Lake Township in eastern Wood County.

“Those major projects in Wood County will have a huge impact on the economy of Western Ottawa County,” explained Stahl, who is also chair of the powerful Toledo

Metropolitan Area Council of Governments. “They will provide an impressive number of jobs for the region, especially for residents in nearby Western Ottawa County. Our job has been to get out and help make the infrastructure and economic developments happen.

“The design on the overall $4.3 million water project that includes Elmore will be done by August or September,” said Stahl. “Elmore has also applied for Ohio Public Works grants to complete work in the village. The Ottawa County Commissioners have been working collaboratively with Elmore to have the financing in place.”

The $109 million in third-round BUILDS funding will support more than 100 drinking water and wastewater projects. That includes a $1 million grant for the City of Fremont.