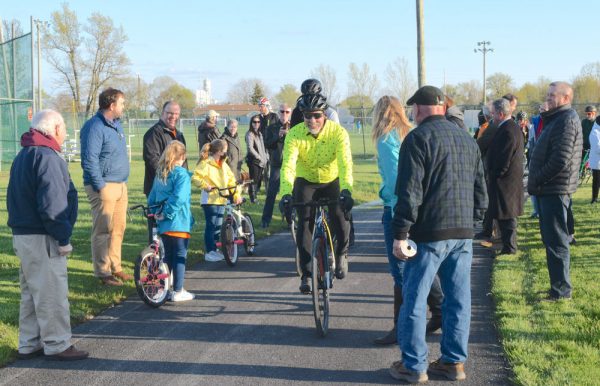 Members of the Flatlanders Bicycle Club were among the first bicyclists to tour the Elmore-to-Geneoa section of the North Coast Inland Bike Trail after last Thursday’s ribbon cutting. (Photos by D’Arcy Patrick Egan)

GENOA — When bicyclists rolled in to the Village of Genoa on Thursday night, their journey included a pair of ribbon cuttings and a surprising number of people pedaling the four-mile trail, it was an enormous victory for the family of the late Agnes E. “Tomme” Bergman. 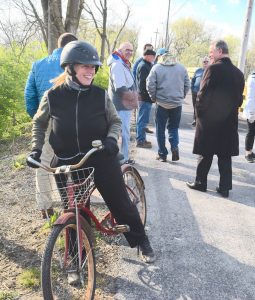 Kandace York of Luckey, Ohio took a cruise on the new North Coast Inland Bike Trail as it crossed the Portage River in Elmore, and gave it her stamp of approval. (Photos by D’Arcy Patrick Egan)

“It’s an enormous achievement for the Bergman family and the Village of Genoa,” said Genoa Mayor Tom Bergman, grandson of the late Tomme Bergman. “It’s a bit sentimental. I get to cut the ribbon on a project my grandmother started more than 30 years ago.”

Tomme Bergman got the ball rolling for development of the North Coast Inland Bike Trail in the late 1980s, a feisty woman whose civic accomplishments in Genoa, a small village in western Ottawa County, are legendary.

“My grandmother led so many causes in Genoa,” said Bergman. “She was always the paragon of civic involvement, from saving the Genoa Town Hall in the 1970s, to protecting other historic buildings. For more than 50 years, Tomme was the champion of small towns everywhere before she passed away in 2001.”

The mother of eight boys and six girls, Tomme grew up in New York City and attended Juliard before marrying Eldo Bergman, who had just graduated from the U.S. Naval Academy. While her husband was out to sea, Tomme Bergman was a first-hand witness to the attack on Pearl Harbor.

“The North Coast Inland Bike Trail was her passion, and a long time coming. And it has been a group effort,” said Bergman. “Today we’re seeing it as an amazing success story.”

The Elmore-to-Genoa bike trail was appropriately dedicated on Earth Day.

The first ribbon cutting last week was by Mayor Rick Claar of Elmore, a scenic little village on the Portage River. Converting an overgrown, abandoned railroad trestle into a beautiful bridge over the river was a key to the entire project, estimated to cost $2.5 million. About 80% of the costs will be covered by the Ohio Department of Transportation and the Ohio Department of Natural Resources.

Elmore is gearing up to be a recreational river town. The bike trail has helped spawn the Spoke Life Cycles bicycle shop and the I Scream on Your Left ice cream shop, both on Maple Street.

Crossing the bike trail bridge over the Portage River on her battered old red bicycle with a basket pinned to the handlebars, Kandace York of Luckey, Ohio, was impressed. 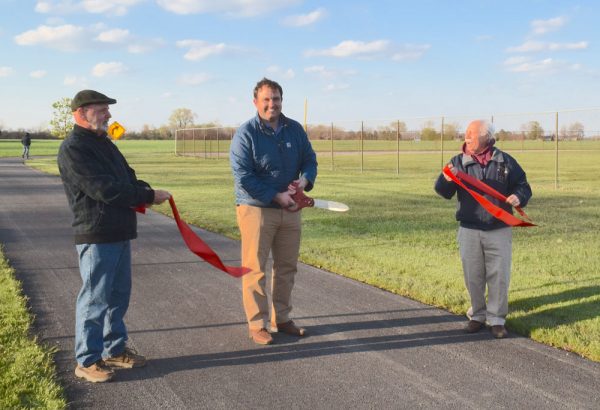 Mayor Tom Bergman snips the red ribbon to dedicate the North Coast Inland Bike Trail as it winds its way through Veterans Park in the Village of Genoa.

“The new bike trail is very nice,” said York. “I rode from the parking lot in Elmore to Opfer Lentz Road, three miles west of town, and it was smooth sailing.”

The Ohio Department of Natural Resources has been working with the villages of Elmore and Oak Harbor and the City of Port Clinton on the Portage River Water Trail, developing small boat launches and other facilities and putting up recreational signage.

There are two canoe liveries on the historic river in Oak Harbor and Port Clinton, and Port Clinton is developing a small boat launch in downtown’s Waterworks Park at the mouth of the Portage River. 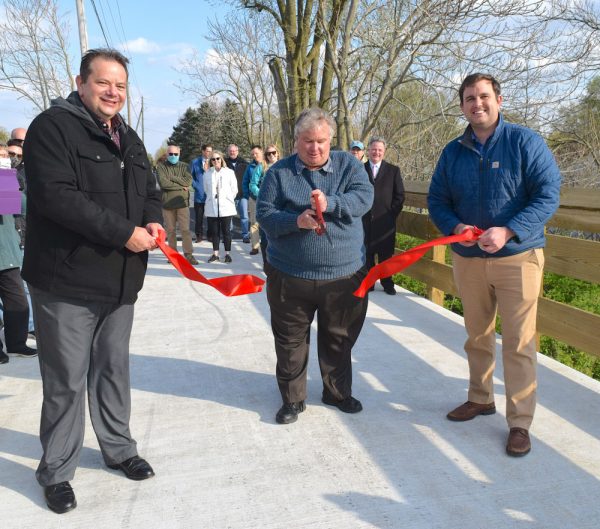 Mayor Rick Claar of Elmore cuts the red ribbon for the new North Coast Inland Bike Trail as it crosses the Portage River on an attractive new bridge in the Village of Elmore.

It was obvious the new bike trail is popular. Before Claar could snip the red ribbon in Elmore, members of the Flatlanders Bicycle Club pedaled through a crowd that included Ottawa County Commissioners Mark Stahl, Mark Coppeler and Don Douglas, and headed for Genoa. Coppeler and Douglas pedaled their way to the next stop, arriving in Genoa about as quickly as those who drove the highways and byways to get there.

Bergman and Genoa officials were waiting, with another ribbon cutting at Veterans Park, where baseball games were in action. Bergman said the bike trail will soon be relocated around the historic quarry at Veterans Park, and continue on to Millbury in eastern Wood County.