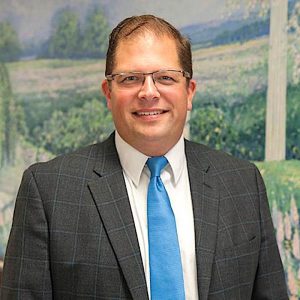 Heidelberg University’s band director Jon Waters, a native of Elmore, Ohio in western Ottawa County and a 1994 grad of Woodmore High School, has been chosen to direct the first America’s Band Directors Band during the prestigious Rose Bowl Parade on Saturday, Jan. 1 in Pasadena, Calif.

The Ohio State University will battle the University of Utah, which won the PAC-12 Championship game against Oregon, 38-10, in Las Vegas on Dec. 3.

Waters, assistant professor of music education and director of bands at Heidelberg, has gathered more than 300 band directors from around the country who will be performing during the Tournament of Roses Parade. All 50 states and Mexico are represented in the Band Directors Marching Band specifically comprised of middle and high school band directors.

The band was established through the Sewell Foundation of Pickerington, Ohio, said Waters. “There will likely never be a more experienced band assembled than this one. What’s more, the band will represent music educators from across the country and around the world.”

The diversity of the members is unique, Waters said.

Travis Magoto, a band director for the Benton-Carroll-Salem Local School District in Oak Harbor, is one of the band directors selected to convey the theme: “America’s band directors: We teach music. We teach life.”

Magoto has been a band director in Oak Harbor for the past 14 years, following his graduation from The Ohio State University in 2007. The Oak Harbor Bands have regularly been recognized for their high levels of performance and achievement. Magoto was named the Benton-Carroll- Salem Local School District “Teacher of the Year” for the 2019-2020 school year.

There’s a father who’s recently retired and his daughter who followed his footsteps as a band director, and another from a remote island in Alaska. And one of Heidelberg’s own — Blake Depinet, a senior music education major from New Riegel — will participate with his grandfather.

“From the beginning, we did not want to take away a spot from a high school or college band,” said Waters. “We are calling ourselves a float with a band in and around it. We’ll be a float with 250-plus outwalkers,” Waters said.

The music performed by the band is to tie in with members’ local service projects.

“We’re asking each director to engage in some community service element in preparation for the parade in their home communities,” Waters said. “Then, the students will recognize their tunes in the parade. It’s bigger than just a single performance in sunny California on Jan. 1, 2022,” said Waters. “It represents the power of music in students’ lives.”

Waters is an internationally known music educator and band director. As director of marching and athletic bands at The Ohio State University, his innovative use of iPads in creating unprecedented animated marching formations led to worldwide recognition and millions of You Tube hits. In 2014, he delivered a TEDx talk on “Tradition thru Innovation.”

Waters is a graduate of Woodmore High School and still has many ties to Ottawa County, said his aunt, Jeanie Waters Radloff. A few years ago, Waters brought the Ohio State Marching Band to play at Put-in- Bay. This year, he brought the Heidelberg Marching Band to perform at halftime of a Port Clinton game.

The Saluting America’s Band Directors custom-designed float includes many art pieces designed by Tom Batiuk, the creator of the “Funky Winkerbean” comic strip. The design for the float includes a drum major, flutist, a trombonist, and is led by a band director marching on a football field.

The float itself will consist of eight roses of different colors and dried natural materials such as coffee and coconut that make up the marching band figures seen on the float.