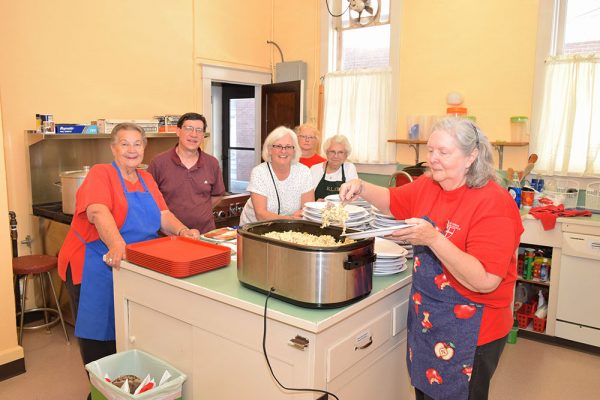 The free monthly ELMS meals at St. Thomas Fellowship Hall in Port Clinton are created by this hard-working crew in the kitchen. Under the direction of Debby Barnes, they were serving hearty beef stroganoff and all of the fixings. From left to right are: Susan Doell, Jason Barton-Kashmer, Marie Janes, Mary Degrisky and Ann Colston, with Barns ladling out the hot, tasty meals. (Photo by D’Arcy Egan)

There are many reasons why so many look forward to the third Thursday of the month in Port Clinton from September through May. The monthly free ELMS Community Meal is served at 5 p.m., drawing a crowd of local folks to the St. Thomas Fellowship Hall on the corner of West Second and Jefferson streets.

“There are some who truly need a hot meal,” said Debby Barnes. “For others it is enjoying the camaraderie with friends and neighbors, a very social visit. For the 12 to 15 volunteers that make the ELM Community Meal happen, it’s a labor of love.”

Barnes and Jason Barton-Kashmer do the cooking, and she says the meals are always made from scratch. Last week, it was hearty beef stroganoff, and variety of sides and deserts.

While the meals are free, including carry-out meals that are available, many make a donation to keep the program going each year.

ELMS stands for Episcopal Lutheran Meals Shared. The program began a decade ago as parishioners from St. Thomas Episcopal Church and Peace Lutheran Church teamed up to provide an evening meal for local residents.

At the time, the two churches shared a pastor, Mike Weichers, whose wife, Angie, developed the idea of ELMS. The Weichers moved on after three years, and Barnes became head chef, later joined by Barton-Kashmer.

Barnes, office manager with the Ottawa County Building Department, is one of four volunteers who have been mainstays since the beginning. She’s been afraid to let go for fear the program might languish, and still looks forward to working with the regulars at the monthly meals.