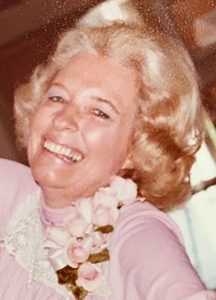 Elva L. Thomas (nee Christiansen) 92, of Lorain, and long-time seasonal resident of Lakeside, died on July 17 after a long battle with CLL.

Born and raised in Minnesota and attended the University of Minnesota. Exemplar member of Beta Sigma Phi and retired member of The American Registry of Radiologic Technologists.

Preceded in death by her husband John “Jack” Thomas who she married in 1957 after meeting on the Great Lakes cruise ship South American. Mother to Christine (Scott) Crompton of Hudson, John (Sarah) Thomas of Willoughby Hills and Lakeside, Jane (Ronald) Crandall of Marblehead, and Patrick (Carolyn) Thomas of Lorain. Grandmother to 5 and Great-Grandmother to 3 with more on the way.

Her passions were working, interacting with the public, and cooking – especially pies, Saturday “frickin’ chicken” for her husband, and Sunday suppers. When asked what time in her life she would ever wish to return to the response was the 1970s working at the Abigail Tea Room in Lakeside, where she remained as hostess and baked until its closure in 2007.

Private burial will be at The Memorial Garden at Chautauqua Park in Lakeside. In memory of Elva please listen to the song Summer Wind performed by Frank Sinatra. Memorial contributions may be made to Stein Hospice www.steinhospice.org.