Emmett Duffy Sr. had a long career as a fireman with the Cleveland Fire Department, retiring after 30 years of service and moving to the Marblehead area. That’s where the popular Duffy celebrated his 100th birthday last week, surrounded by a wealth of friends at the Danbury Senior Center and honored by a crowd of local firefighters.

A surprise party was in order for the new centenarian, and all of the folks at the Danbury Senior Center to congratulate him shocked the 100-year-old. All of Duffy’s firemen friends from the Danbury and Port Clinton fire departments were ready to give Duffy his first ride on a fire truck in 39 years, touring the Marblehead Peninsula with lights flashing and sirens blaring.

Staff members Paula Shenkel and Deanna Johnson of the Danbury Senior Center had plenty of cake and ice cream ready, and lots of kind words.

“This will truly be a night we will never forget,” said Shenkel, Site Manager for the Danbury Senior Center, “God Bless this special man, truly the nicest person I have ever met.”

Duffy is a U.S. Navy veteran, spending four years in the service during World War II. He joined the Cleveland Fire Department, and after 30 years of fighting fires, he retired to bucolic Marblehead. In recent years Duffy has been a regular at the Danbury Senior Center, and has also worked as a representative to the Ohio County Senior Advisory Board. 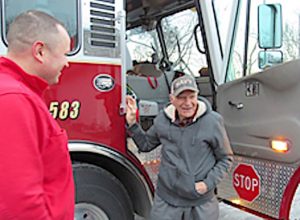 Emmett Duffy Sr.’s many friends celebrated his 100th birthday party last week at the Danbury Senior Center with a surprise party that included a ride around town for the retired Cleveland fireman in a fire truck.