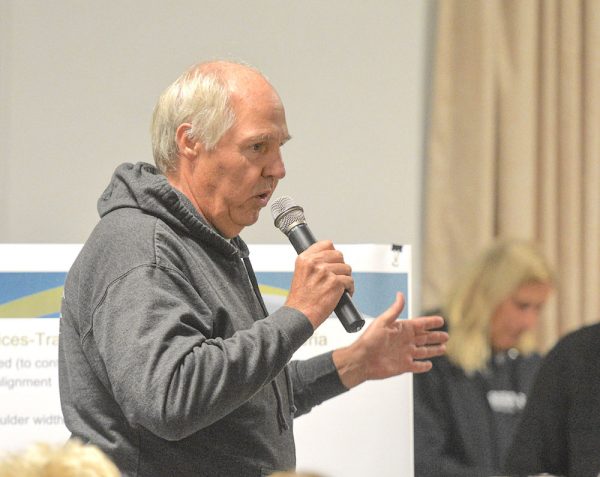 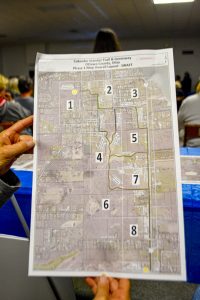 A local resident studies information on the Catawba Islander Trail and Greenway project amongst a standing-room-only crowd at the Catawba Township Community Hall. (Photo by Sheri Trusty)

Emotions were high as nearly 250 people gathered at the Catawba Township Community Hall on Wednesday, Oct. 26 for an Open House highlighting the Park District of Ottawa County’s plans to develop a multiuse trail through Catawba. Park District of Ottawa County Executive Director Jannah Wilson invited the public to learn about the project, which is still in the elementary planning stages, from park affiliates and Poggemeyer Design Group, which was retained to develop the Catawba Islander Trail and Greenway Master Plan.

Impassioned Catawba residents on both sides of the debate spoke at the event, either sharing their excitement over a trail which will be utilized for generations or their concerns such as privacy issues, parking areas and potential loss of natural landscape.

Among them were farmers Dave Howell and Quintin Smith, who shared very differing perspectives on the project during a public comment segment of the open house. Preliminary plans show the trail bordering Howell’s fruit farm on the south end of the island.

Howell is concerned about losing privacy on his farm, fears fruit theft, and is worried that the trail will bring the public close to his crops after pesticide applications.

“I look at this as an attack on agriculture,” Howell said.

Quintin Smith and his wife, Donna Smith, became fruit farmers as a retirement project for the purpose of protecting Catawba’s historical cropland. The Smiths have invested time, money and resources into preserving Catawba land and, unlike Howell, Quintin sees the trail as a means to preserve agriculture and keep the island from being overrun by residential construction.

“I don’t believe this is an attack on agriculture,” Quintin said. “This is a way to preserve green space.”

Wilson told the crowd that the park district is “passionate about saving green space” and hopes to implement a tree-planting campaign to replace trees felled during the project with native species.

One of the most oft-repeated concerns was the fear of eminent domain. New and long-time property owners feared losing control of their land, but park district board members assured the crowd that eminent domain would not be utilized.

Instead, the park district is looking for “willing homeowners” who are attracted to the benefits, such as close access to the trail and potential increased property value.

Wilson told the crowd that the Master Plan is a working plan that will evolve as the public provides input. The open house focused on the first of five phases of the plan, each of which will take three to five years to implement.

For now, Quintin encouraged the crowd to work together on a solution.

“We shouldn’t be so divided on a path our children and grandchildren can use,” he said. “We own this problem. It’s up to us to solve it. There is a logical way to get through this where we’re not all perfectly happy, but we’re less mad.”