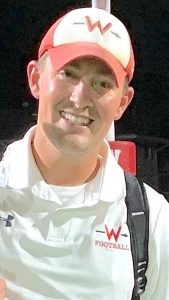 Port Clinton High School has found its new head football coach, as Eric Leuthold beat out a pool of 20 other candidates from five states to lead the Redskins in 2022.

Most recently, Leuthold, 30, was the offensive coordinator at Wapakoneta. He also previously coached at Liberty-Benton, Ridgedale and Colonel Crawford, his alma mater. Leuthold is a 2010 graduate of Colonel Crawford and a 2014 graduate of Bowling Green State University.

He will also work as an intervention specialist in the school district.

“Words can’t describe how excited I am to be a Redskin and serve the Port Clinton community. To be a head coach is something that many coaches work to accomplish,” said Leuthold. “To have this opportunity at such a prominent and successful district, both academically and athletically, is unbelievably exciting.

“From the very beginning of the process, I have met people here that are first-class individuals and made me feel at home. From afar, I have always tried to stay attune to Port Clinton football as well as the community,” he said.

“I have always believed this to be a unique place to work, live and raise a family. I have been blessed with some incredible opportunities that I believe have prepared me for this challenge. Coupling all of this with the fact that my wife is from around the area and we have family living within (the city), we feel like this is a great fit for my family and me.”

Leuthold drew a great deal of praise from his former head coaches, and Supt. Pat Adkins of the Port School District.

“We are eager to welcome Coach Leuthold to our Redskin family. He comes highly recommended from the Hall of Fame coaches he has worked with,” said Adkins. “Coach Leuthold will bring passion, and a strong knowledge of football to our program. He will continue our drive to not only produce great football players but outstanding young men.”

One of the selling points was the Port Clinton Fieldhouse, a 26,000-square-foot, state-of-the-art facility.

“The administration spent some time showing me all of their facilities during the interview process,” said Leuthold. “The complex is very impressive and shows the community and district’s commitment to excellence as well as their support for student-athletes.”

Leuthold will lead a program that is in good shape. The ‘Skins are coming off of the best season in school history, one that saw them win a regional championship, a first for the program under former coach Beau Carmon.

“I haven’t had a lot of time to evaluate the program as a whole yet. Once this information is gathered, we will better be able to identify areas we can strengthen,” said Leuthold. “Everywhere I have been, we have believed in attempting to grow in some facet daily. Each day we have an opportunity to try to strive for excellence and build on yesterday’s successes.

“With this mindset of striving to improve daily, we can begin to build upon the success that has been established here. We always want to work to improve 1% in some area — whether that can be academically, athletically or personally.”