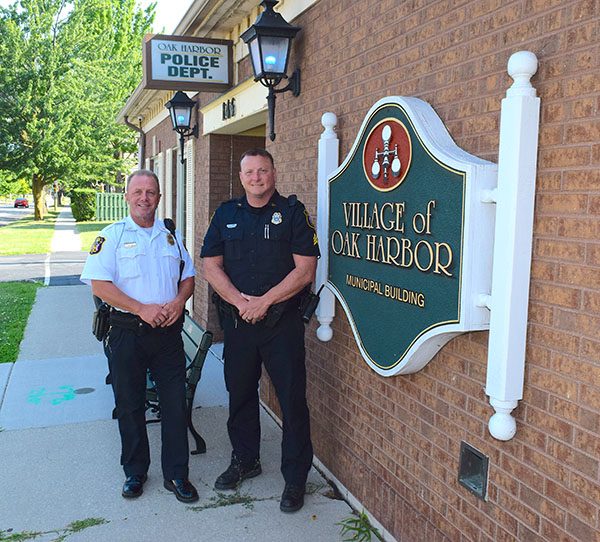 Steven R. Weirich (left) is retiring after 24 years with the Oak Harbor Police Department, 17 as chief of police. He will be replaced by 20-year veteran Sgt. Eric S. Parker. (Photo by D’Arcy Egan)

The two men are almost two peas from the same pod.
Both are fit, trim and friendly reminders what a village police department is all about. The two men graduated from Oak Harbor High School more than a dozen years apart, but both enjoyed wrestling and football, and approach police work as lifetime career.

Weirich was a sergeant for seven years before accepting the chief’s position in 2002.
“Police work here is different than in the big city,” said Weirich. “I prefer a small town rather than a big city any day. In a small town you know everyone by their name, not a number. It’s a much friendlier environment.”

Some things have changed, though, said Weirich. Small town police departments have been rocked by the opioid epidemic, and a more mobile population, especially if it is a village situated on state highways such as Oak Harbor.

“It is certainly not like Andy Taylor of Mayberry,” said Weirich. “When I became a police officer, though, we dealt with alcohol problems and fighting. We rarely see those crime problems today, but we are battling the dreaded opioid problem, and the crime it creates.”

“Chief Weirich has been a member of our public safety community for more than 30 years and been a guiding force through all of Oak Harbor’s celebrations and tribulations during his 17 years as chief,” said Mayor Quinton Babcock. “While I don’t think anyone is ready to see him go, his retirement has been met with warm wishes by everyone in the community.”

Oak Harbor Village Council planned to confirm Parker as new chief last Monday. Babock will swear in Parker on the afternoon of Aug. 26.

“Chief Weirich leaves some very big shoes to fill, but we are confident the shoes will wear well on Sgt. Parker,” said Babcock. “When I speak to residents, I hear a lot of praise about Sgt. Parker’s work, and we are happy how smoothly the transition is going.

“To see the torch passed to another lifelong Oak Harbor resident and career Oak Harbor Police Officer fills me with optimism for the future.”

Oak Harbor is growing again, with new businesses, and the beautiful Portage River in its midst with a wealth of recreational activities.

Weirich is looking forward to doing a little more fishing and hunting, and work on his 1984 Chevrolet Monte Carlo SS, a popular restoration.

“My wife, Jill, who works in radiation oncology at ProMedica in Fremont, is jealous of my retirement,” said Weirich, with a laugh. “And I know I’ll probably be up here at the police station every once in a while, pestering these guys. Police work is what I know best.”

Parker, 43, served four years in the U.S. Marine Corps, including many overseas assignments that include the Persian Gulf and a total of 13 countries. He has been with the Oak Harbor Police Department for 20 years, rising through the ranks to be a sergeant.

“Working as a policeman in Oak Harbor is unique,” said Parker. “Working with Steve the last month to get acclimated to the new position, I’ve learned to appreciate the need to work with the community and its businesses, to let everyone know we’re still going to be very accessible.”

Parker and his wife, Michele, were high school sweethearts. She works for the Ottawa County Board of Developmental Disabilities in Oak Harbor.

“My wife and I loved growing up here, and living here,” Parker said. “The village gets a lot of compliments from people who are passing through, and we take a lot of pride in hearing that.”