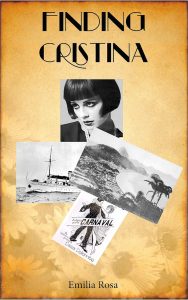 Emilia Rosa has wound a tale that is taking readers back to the early 1920s, the tropical city of Rio de Janeiro. It is February. Carnaval time!

The author and her book, “Finding Christina,” will make an appearance in Marblehead on Saturday, Aug. 28 at 9 a.m. at Tomi Johnson’s Victory Coffee & Company, 724 W. Main St.

Emilia Rosa was born in California and raised in Brazil. During her childhood she lived in Rio de Janeiro, where every sunny weekend was generally spent at the beach. Having moved to South of Brazil, she holds fond memories of summer vacations spent with her married sister in Rio, which also involved many hours at the beach.

Her love for the sea and Rio de Janeiro, as well as that city’s history, permeates the pages of her first fiction book, Finding Cristina. During her teens she avidly read in Portuguese, Spanish, English, French and Italian. A few years ago she developed a love for murder mysteries written during the Golden Age of Detective Fiction. Rosa moved back to the United States several years ago. She has published poetry and is planning a sequel to Finding Cristina.

“Finding Christina” will be available at Victory Coffee, and at Amazon.

The action includes mystery, romance, chivalry, bravery, kidnapping, matchmaking, blackmail and even a duel! Funny, with a drop of mystery and a diverse cast of characters, Finding Cristina is a tale of two people finding love and happiness while not looking for it. Available at Amazon as paperback, large print and kindle.