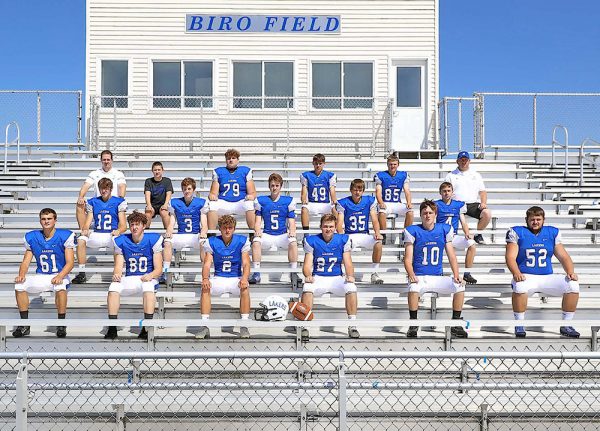 Preview: After playing with younger, more inexperienced lineups in the past, this year’s version of the Danbury Lakers features a number of seasoned upperclassmen who are eager to compete in the school’s first year in 8-man football.

Danbury, which has 15 players on the team, is set to begin play in the Northern 8 Football Conference, a league that features small schools in northwest Ohio who have made the move to 8-man football.

The Lakers return a number of key players — 13 starters overall — including quarterback Kaden Conrad. The senior will be joined in the backfield by tailback Cole Shortridge and the combination of Will Tibbels and Cade McCarthy at H-back.

“We are a wing-based offense, but not entirely Wing-T. We employ a power-run offense, with some principles of the Wing-T,” said Danbury Coach Keith Mora. “We’ll play with double tight ends at times. A lot of time we have a wing present or a slot receiver present and we’ll use them in the run game as well. At times, we’ll have four or five offensive linemen. We have the ability to have three as well, with more of a spread formation.”

Thus far, Mora likes what he has seen out of his offense.

“When our offensive coordinator changes things up, the (offensive linemen) understand for the most part how things change, what the difference is between an even front versus an odd front,” he said. “There’s a lot of maturity on the line. I feel good about our offensive line.”

Conrad will be entering his fourth season as the starting quarterback.

Needless to say, Conrad is excited for his senior season.

“For a while, it was unclear if we were promised a football season,” he said. “ I recognized over that span just how much the game has meant to me. To take the field with my teammates means more than I could put into words. I appreciate all of the hard work from the coaching staff and my teammates.”

Shortridge is the feature back in the offense.

“Cole who has been getting starting reps since his freshman year,” said Mora. “He sees things that he might not have seen if he didn’t have multiple years of experience.”

The senior is primed for a big season.

“I’ve learned a lot these past three years,” Shortridge said. “My teammates and coaches have pushed me to be a better player.”

Webster and Frattaroli are on the line, Conrad and Connor McCarthy are the outside linebackers and Wunder and Shortridge are the inside linebackers. Caskey, who is also the kicker and punter, and Cade McCarthy will be the cornerbacks. Mora notes that Jacob Mischler could also see time on both sides of the ball.

Things are operating a little more smoothly now that the team has so many upperclassmen.

“They’re looking good. I think we thought we would have a little more in terms of numbers. We’re very junior and senior heavy. When it comes to the kids picking things up, it’s happening at a better rate than in previous years because the kids have been playing for several years,” said Mora. “Maybe in 2016 is the closest we came to having this many juniors and seniors.

“These seniors, when they came in as freshman, I started several of them on one or both sides of the ball. I told them, ‘I knew by your senior year, you’d have a lot of experience, and it would pay off.’ I’m excited to see what we can do.”

It’s a tight-knit group that has waited years for this opportunity. The Lakers will likely be much more competitive in 8-man football.

“(The seniors) are very close,” said Wunder. “We have played football together since elementary school. Furthermore, we have played other sports together, too. We will have a great season.

“We have pushed ourselves more than we ever have. This season will turn the page on our culture.”

In 8-man football, the sidelines are brought in seven yards from each side.

“The sidelines of an 8-man field would line just underneath the numbers. It doesn’t look a whole lot different from regular (11-man) football. That’s the major difference,” said Mora. “The defensive side of the ball is so difficult because you feel like you are missing players. You can’t draw up an 8-man defense.

“So much of this game is about finding the edge and getting outside of that widest guy on the defense. In some ways, the game is a little bit faster from sideline to sideline. It’s not a whole lot different. The hash marks come in a little bit. It’s a little more narrow than 11-man football. It’s going to make for an interesting chess match.”

The teams in Danbury’s conference include St. Mary Central Catholic, Stryker, Holgate and Toledo Christian. The Lakers will play each of those teams twice.