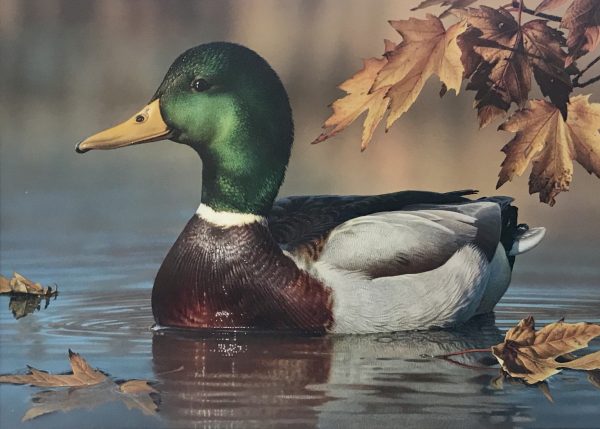 An avid waterfowl hunter and a talented wildlife artist at a very young age, Grimm grew up in the Elyria, Ohio area. He stunned the waterfowl art world two decades ago by winning the Federal Duck Stamp Competition in 2001. At 21, he was the youngest to ever capture the prestigious honor.

Grimm was featured in the documentary “The Million Dollar Duck,” which dove into the wonderfully eccentric world of the Federal Duck Stamp Contest – the only juried art competition run by the U.S. government. The film, which can be accessed on YouTube, follows six artists as they competed in the most intense competition of their life.

Grimm and his family often return Ohio to visit his parents, Len and Jane Grimm, who still live in Elyria. He also still relishes waterfowl hunting in the Sandusky Bay region, and visiting with his many hunting and artist friends.

“It’s still my hometown show,” said Grimm. “Our family enjoys the wilds of South Dakota, but it’s always fun to come back to Ohio and visit with old friends.”

The Ohio Duck Stamp is administered by the Ohio Division of Wildlife, with each year’s winning stamp required of all those 18 and older who hunt waterfowl in Ohio.

Second place in this year’s Ohio Duck Stamp Contest was Frank Dolphens, of Nebraska, who submitted a painting of green-winged teal. Third place was a tie between Clark Sullivan, of Michigan, and Justin Madding, of Arkansas, who submitted paintings of mallards and wood ducks, respectively.

An Ohio Wetlands Habitat Stamp costs $15 for Ohio residents and nonresidents. The stamp is available at wildohio.gov and anywhere hunting licenses are sold in the Buckeye State. During the 2018-2019 hunting season, 26,872 were purchased by Ohio hunters and conservationists.

A portion of the funds from the sale of Wetlands Habitat Stamps in Ohio are directed toward a $150,000 contribution to the Ducks Unlimited (DU) state grants program, of which Ohio is a charter member. Ohio joined Louisiana and South Carolina in 1965 in contributing funds through DU for wetlands projects in Canada, the nesting ground of many migratory waterfowl species.

Ohio has made an annual contribution every year since 1965. Since 1982, Ohio’s contribution has been through proceeds from the Ohio Wetlands Habitat Stamp, the first year it was required for hunting waterfowl.

John A. Ruthven was commissioned to paint the first Ohio Duck Stamp, and his artwork displaying a pair of wood ducks were issued to hunters that year.