Father and son creating a family legacy at Dunn Law 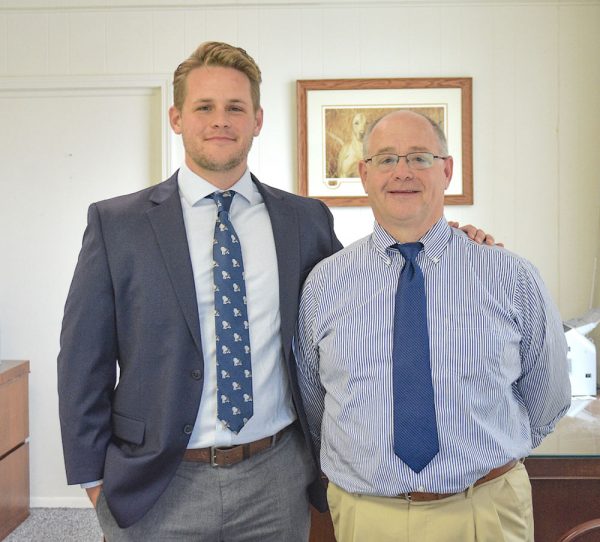 Attorney Terry Dunn has welcomed his son, Connor, into the Dunn Law Firm in Port Clinton after his graduation from The University pdf Toledo College of Law. (Photo by Sheri Trusty)

Terry Dunn always knew he wanted to be lawyer, but his son, Connor Dunn, didn’t consider a career in law until he was an adult. Nevertheless, Terry and Connor are now practicing law together at Dunn Law in the Port Clinton neighborhood where Terry grew up.

“I always told my grandmother I was going to be a lawyer,” Terry said. “As soon as I figured out I couldn’t be a professional football player, I decided to become a lawyer.”

Connor initially studied to be an architect, but when he recognized that he lacked the passion his classmates had for the profession, he instead obtained a criminal justice degree. Then he made the decision to attend law school.

“Growing up with my dad as a lawyer, I was familiar with his work. I decided I’d pursue law, and it ended up being a good thing,” Connor said.

Terry’s involvement with Winters’ programs has altered his perception of the people he defends in court, changing Dunn as he now helps change program participants.

“It’s a great addition to my whole being,” Terry said. “I see things from a different perspective than when I was a straight defense lawyer. I get to see in depth what these guys go through and all the minute struggles they face. As a defense lawyer, I didn’t think about that.”

Terry has been practicing law since 1988, and now he is sharing those years of knowledge with Connor, who began practicing law in November 2021. Both graduated from the University of Toledo College of Law.

“He’s showing me the ropes on everything, and I love working in Port Clinton,” said Connor, who commutes from his home in Toledo to work with his dad. “I was always sad when I had to leave for college. It was always a treat to come home, and now it’s great to be here five or six days a week.”

For Terry, the Dunn Law office, 428 Fremont Rd, Port Clinton, has always felt like home. He owns the building that includes his office and other businesses, and he grew up nearby when the building housed a Sinclair gas station and a beauty salon. Prior to that, it was a Packard car dealership.

“I grew up in this neighborhood and used to come up here every two weeks with my grandmother when she got her hair done,” Dunn said. “This neighborhood is special to me.”

Now the Dunn name is as much a part of the neighborhood’s history as Sinclair and Packard.