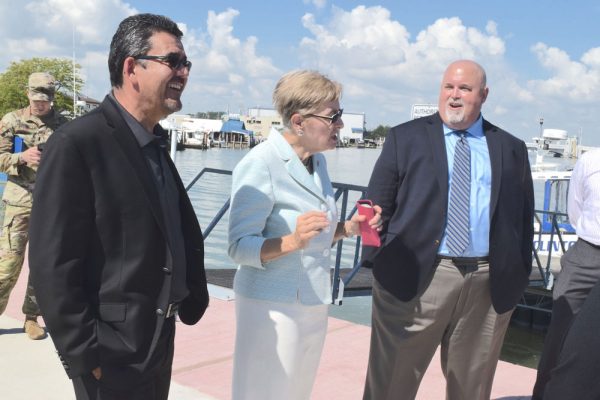 Federal officials rolled into Port Clinton last Thursday morning to see how the funding they’ve been providing for the Forward Looking Infrastructure Project (FLIP) program approved by voters last Nov. 2 that is spending $34 million to finally begin the structural renovation of the port city.

With U.S. Rep Marcy Kaptur of Toledo leading a group from the U.S. Army Corps of Engineers, the veteran legislator and chairman of the powerful House Appropriations Committee — which oversees the Corps of Engineers — wanted to see and hear how Port Clinton was spending the federal funds, about $2 million, it had already received since local voters approved FLIP on the Nov. 2.

While FLIP provides $34 million for new water and sewer lines and rebuilding roads, the funding will allow the city to use that tax revenue for matching funds in order to apply for state and federal grants and loans.

At the top of the mountain for Port Clinton is the Section 594 Program that provides design and construction assistance to non-federal interests for carrying out water-related environmental infrastructure and resource protection and development projects in Ohio.

The impressive cadre of officials from the Corps of Engineers sitting down at the table with Mayor Mike Snider and Rep. Kaptur at the Port Clinton Sewage Treatment Plant near the Jet Express depot in Port Clinton included: Michael L. Connor, the Assistant Secretary of the Army (Civil Works); Brigadier General Kimberly Peeples; and Lt. Col. Colby K. Krug, commandant of the Buffalo District of the Corps of Engineers, which covers Lake Erie and the Great Lakes.

“Assistant Secretary Connor and Rep. Kaptur wanted to see where additional funds would be used, and the beneficial impact of the Corps plan to dredge the Portage River in 2023,” said Snider. “The Corps also wants to upgrade the two jetties at the mouth of the Portage River and its red and green lights for boating safety.”

“We wanted to see what the city has done, and what it still has to do,” said Rep. Kaptur. “Port Clinton is very fortunate to have a mayor who really wants to do something, and an administration ready to work with him.” 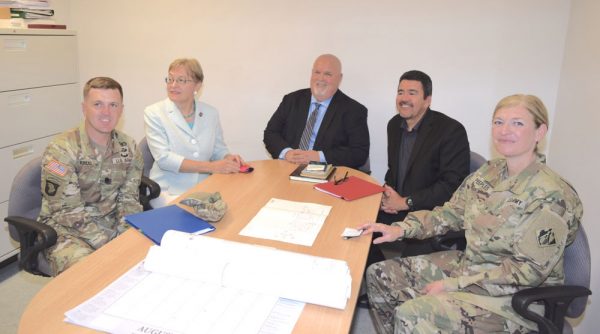 There was much in the way of meeting space at the Port Clinton Sewage Treatment Plant, and huddled around the table were, left to right, Lt. Col. Colby K. Krug, commandant of the Buffalo District of the Corps of Engineers; U.S. Rep.Marcy Kaptur; Port Clinton Mayor Mike Snider; Michael L. Connor, Assistant Secretary of the Army (Civil Works); and Brigadier General Kimberly Peeples. (Photo by D’Arcy Patrick Egan)

After the meeting, the group toured the Portage River Walkway, a 900-foot linear boardwalk that has enhanced the east bank of the river alongside Waterworks Park, leading to the Lake Erie downtown beaches and the new Port Clinton Lighthouse.

“They all wanted to see the improved walkway, which we just opened in June. They were delighted that residents and visitors were already using it to walk, bicycle, watch the boats and ferries and to go fishing,” said Snider.

The $34 million city renovation is just the beginning, said Service Director Tracy Colston. City officials know that $150 million is needed in the long run to renovate the entire infrastructure of Port Clinton. And then it will have to start doing it again, starting in about 20 years.

The fact that Port Clinton officials had blunted development in the city because of the poor roads and infrastructure for the last five or six decades which thwarted economic and residential growth in Ottawa County’s only city.

The FLIP project’s Plan B will cost about $16 million, with sanitary and storm costing $5.4 million and water lines about $8.8 million. Plan A calls for paving all of the streets in the city not impacted by below ground work.

Rep. Kaptur, known for her love of Lake Erie and the Great Lakes, was recently awarded the Gold de Fleury Medal for her “inspirational leadership to the Nation and United States Army Engineer Regiment.”

As Chair of the House Appropriations Subcommittee on Energy and Water Development which funds the Corps, Rep. Kaptur has long prioritized increasing resources for the Corps’ work to rebuild ports and dams, dredge waterways, and protect freshwater ecosystems like Lake Erie.