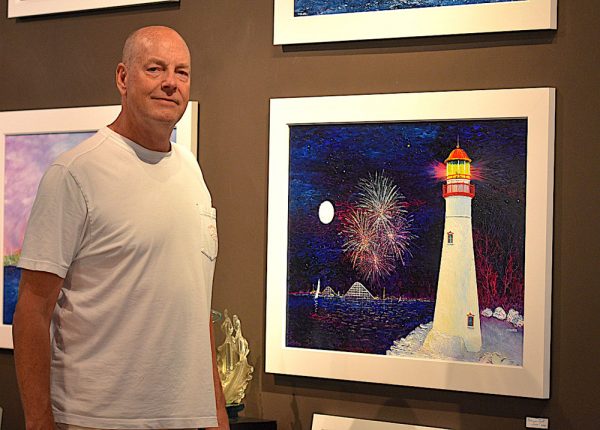 Artist Cary Ferguson stands next to one of his Marblehead Lighthouse paintings in “The North Coast Rediscovered,” an in-house art show at Ferguson Gallery. 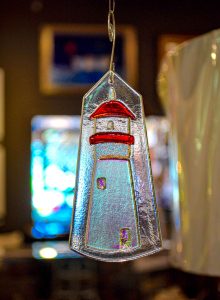 “The Marblehead Lighthouse” ornament is Cary Ferguson’s handcrafted 2022 Christmas ornament. The ornament was released early this year in honor of the lighthouse’s 200th anniversary.

Each lighthouse ornament is made from 10 pieces of glass, each piece hand cut and ground by Ferguson in his art studio.

“It’s very tedious. I have to hold tiny pieces against the grinder,” Ferguson said. “What’s cool about these ornaments is that I’ve been able to get the red piece to have a curve, which was tricky.”

All of Ferguson’s ornaments are made with dichroic glass, a specialty glass which reflects some colors and filters some colors, creating a piece that changes hue depending on the light around it.

“It was invented by NASA for the space program, and then discovered by artists,” Ferguson said. “When you heat it up, it does magical things.”

Ferguson has been handcrafting ornaments for over 30 years. Each year, he creates a different design, which can be challenging after three decades of new ideas.

“It’s a hard thing when you’ve been doing this 30-some years,” he said. “Writers have writer’s block. I have ornament block.”

But this year’s lighthouse anniversary made the decision easy, and he began selling the ornaments this summer to coincide with lighthouse celebrations. Each year, Ferguson’s ornaments are purchased from faithful customers both local and far away.

“I have one guy who buys 60 just so he can hand them out,” Ferguson said. 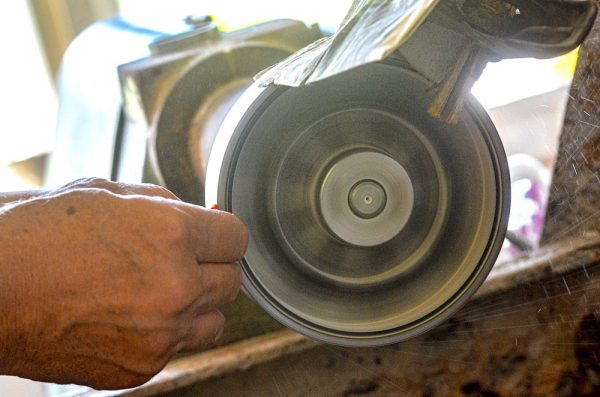 Cary Ferguson grinds a tiny piece of red dichroic glass that will become part of a Marblehead Lighthouse ornament.

Glass is only one aspect of Ferguson’s art. His studio and retail shop are filled with his lakeshore-inspired creations, including dozens of original paintings. On June 11, Ferguson premiered “The North Coast Rediscovered,” an in-house art show featuring his work. Original paintings and prints of lake life, such as the Marblehead, Huron and Put-in-Bay lighthouses, line the walls.

“I had been wanting to paint the Put-in-Bay Lighthouse, and one day, I was sailing with a friend, not even thinking about the lighthouse. We rounded the corner, and I saw the shot I wanted,” he said.

Ferguson’s ornaments are one of the few creations he replicates. Usually, he finishes a work and quickly moves in a different direction.

“I get done with one project and immediately think, ‘What’s next?’” he said. “I’m constantly learning, constantly wanting to create.”