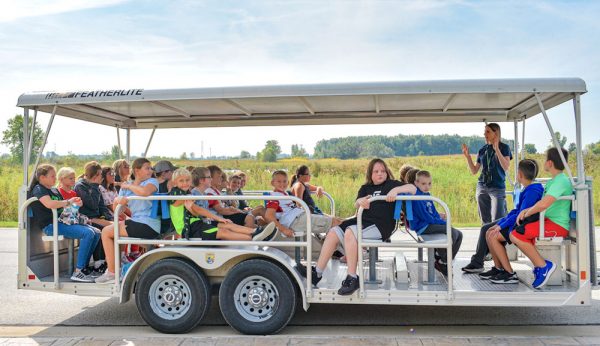 Fifth graders ride a trolley around Ottawa National Wildlife Refuge to learn about the birds and animals that live on the refuge during Fifth Grade Conservation Field Day hosted by Ottawa Soil and Water Conservation District. (Photo by Sheri Trusty)

More than 400 students attended the 60th annual Fifth Grade Conservation Field Day hosted by Ottawa Soil and Water Conservation District on Sept. 15 and 16 at Ottawa National Wildlife Refuge. Students traveled to the event from every school district in Ottawa County as well as Lakota Middle School in Sandusky County. 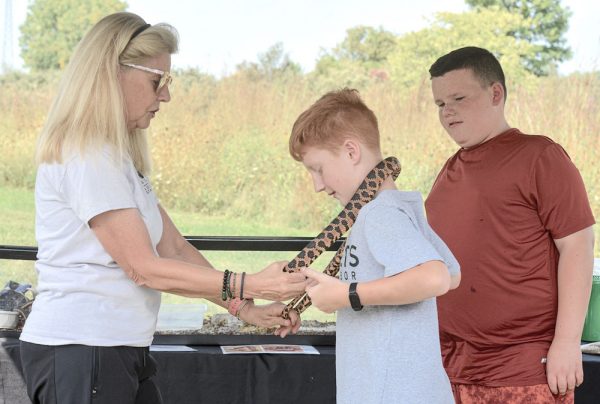 An Oak Harbor fifth grader hangs Bernadette, an Eastern Fox Snake, around his neck with the help of Sue Bixler, an education and outreach assistant with Ohio Sea Grant’s Stone Laboratory. (Photo by Sheri Trusty)

The goal of Fifth Grade Conservation Field Day was to teach students the importance of conservation and natural resources. The students traveled to nine stations where they were exposed to several concepts such as pollination, the food web and recycling. They took trolley rides across the refuge to learn about marsh life, and they had the opportunity to hold an Eastern Fox Snake named Bernadette so they could better understand their role in protecting endangered species.

“It was cool. I like snakes. That was my favorite part of the day,” said Oak Harbor student Kaylee Laubacher. “I also liked the trolley ride. We saw a big white bird and a couple of other birds.”

Oak Harbor teacher Kendra Hartlaub was grateful for the opportunity to expose her students to real-life scenarios related to the concepts they learn in the classroom.

“It helps the kids learn the area they live in and how to keep it safe. They learn to care for the environment,” Hartlaub said. 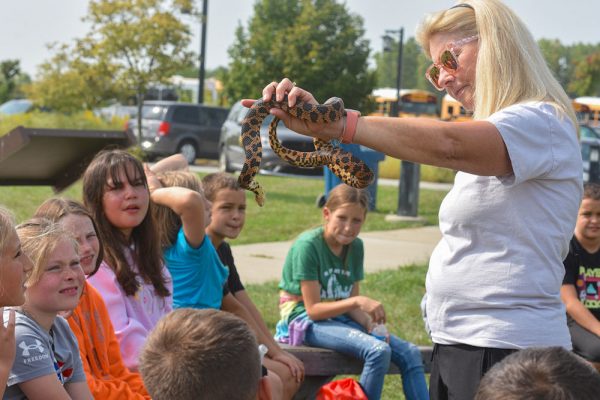 Fifth Grade Conservation Field Day began on the farm of Paul Magsig in 1962.

“It’s been held in one form or another for 60 years,” said Ottawa SWCD Environmental Educator Becky Simpson, who organized the event. “It started on a farm and progressed. In the 70s, it moved to Ottawa and Magee. Over 30,000 students have attended this event.”

For many of them, Field Day provided their first visit to the refuge.

“Hopefully it opened the eyes of the students and their families to the amazing natural resources we have here,” Simpson said.