Finally, a week of fishing worth talking about! 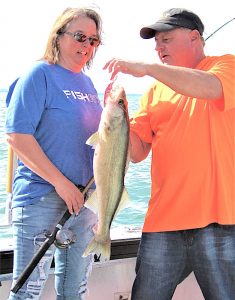 The walleye and smallmouth bass fishing was excellent around the islands and east of Kelleys Island this week. We’ve been waiting for a few weeks to be able to say that after big winds and rain tanked the late summer success.

We will start off with the casting report this week. Anglers who drift-and-cast for their walleye had a fabulous week. The traditional fishermen mainly cast to the rocks and reefs, from the shallowest points to depths down to 15 to 20 feet.

As the day goes on and the pressure rises from the armada of fishing boats, the edges of the rocks also start to produce walleye. Captain DJ and Jeff from Double D Guide Service had a great week while fishing around the rock piles.

The fish caught on small Weapon or mayfly spinner rigs tipped with a piece of a nightcrawler were of an excellent grade. The best spots to be casting were all around Kelleys Island, and anglers were pulling in some pretty good-sized fish off Gull Reef and around West Reef off of North Bass Island.

Trollers did well around the Vermillion dumping grounds. The giant walleye have moved in from the east, including trophy walleye in the 25- to 28-inch range. The lures of choice have been Bandits set at 120 to 130 feet back with a two-ounce weight attached to the leaders. True Trip Deep Diving Planers set at 75 feet back with a crankbait called the Redfin attached are working.

I happened to be out last Saturday with Misty and Louie from Bay’s Edge Bait & Tackle. We went to the Vermillion dumping grounds and the crew quickly put 32 walleye in the cooler. Misty caught the two biggest walleye, measuring 26 inches and 28 inches. She was using a new bait that we will be introducing soon.

I’m proud to say that we are part of making a new product. There are only four of the prototype lures in the world right now, but once in production they will carry the name “Dead-Eye Lures.”

As for the late-season fishing, expect that trolling for walleye should remain excellent for the remainder of the year in waters from Huron to Lorain.

Not much to report on perch fishing around the Lake Erie Islands, but if you want to take the long haul ride out to the Toledo water intake, anglers have been getting some limit catches there.

The smallmouth bass fishing was percolating very well this week. Captain DJ had a good week of fishing for bass in Ohio waters and if you were in Canada you did just as well. The 14- to 16-foot depths seemed to be the key to catching them.

The catfish report remains the same with the Sandusky Bay still the best place to be to pull in some catfish. Raw shrimp dominates as the top channel catfish bait.

Finally, finally, finally we had a report worth giving to you. Until next week, stay safe and be courteous of other boaters. And, as always, get out there and fish.