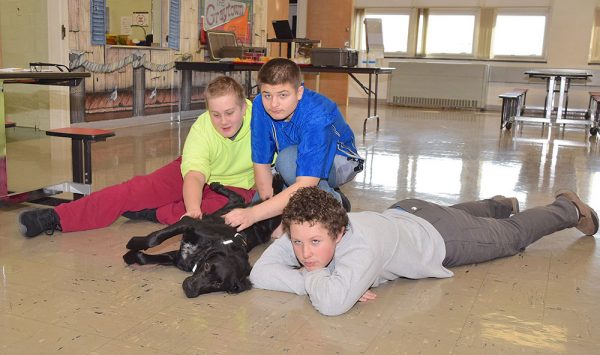 Students find Finn, a nine-month-old flat-coated retriever, to be a calming influence around the North Point Education Service Center in Graytown. (Photos by D’Arcy Egan)

Finn the therapy dog is very calm, cool and collected when he’s on the job at the North Point Education Service Center in Graytown. The nine-month-old black flat-coated retriever is still a puppy at heart, though, reports his around-the-clock handler, Ottawa County Sheriff’s Deputy Chad Millner.

“When he’s on the job as a therapy dog here at the school, he’s been a very calm boy,” said Millner, the school resource officer. “That’s been quite remarkable, when you consider he’s such a young dog.” 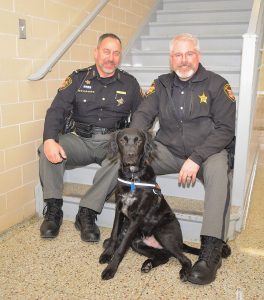 A shiny, black flat-coated retriever, Finn is a popular pup with the students at the North Point Educational Service Center in Graytown. The retriever is at attention when on the job, reports Ottawa County Sheriff Steve Levorchick (left) and handler Deputy Chad Millner.

Finn has also been able to connect with the students, many with special needs.
“I attended a meeting recently for one of our elementary students,” said Lori Chapin, a lead teacher at North Point Educational Service Center. “The parent remarked that Finn is a main contributing factor for her child’s continued success at Graytown.”

“There are times when a student can become agitated or frustrated while at school,” said Millner. “Interacting with Fin really can help to prevent a meltdown. Finn is such a friendly dog, and all of the students just love him, and eager to have him to join them for some fun time.”

When Finn is cooped up in Millner’s small office at the school, he handles it well.
“Finn just heads for his dog bed and goes to sleep,” said Millner, with a laugh.

Finn and Millner are full-time partners. The young dog becomes the family pet after the school bell rings and Millner and Finn head home to their rural home.

“When I take off that therapy dog vest at the end of the day, Finn becomes a pure puppy, racing around the yard and having a ball,” said Millner. “He’s a very friendly guy, one of the reasons he was hand-picked to become a therapy dog. Everyone just loves him.”

It is almost a miracle that Finn became a therapy dog in the first place. As a young pup, he was found wandering the streets of Columbus and taken to the Franklin County Department of Animal Care and Control’s shelter. Finn began to impress the shelter folks with his natural abilities and obedience.

“We were looking for a therapy dog, and they recommended adopting Finn,” said Millner. “They covered all of the costs, including neutering and adoption fees, and got Finn started with obedience training.”

Finn and Millner will head back to Columbus for more formal training in a few weeks, and complete his certification as a therapy dog.

Having dogs to help deputies has become a very positive program for his department, said Ottawa County Sheriff Steve Levorchick.

“Finn has worked out so well that we’re contemplating getting another therapy dog,” said Levorchick. “It’s an inexpensive program, costing just food and veterinarian bills, and both the officers and their families enjoy working with the dogs. They become a real team.”