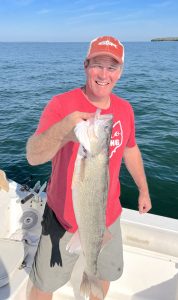 Lt. Gov. John Husted shows off a Fish Ohio Day trophy walleye he caught on Thursday as he and his dad, Jim, were drifting north of Kelleys island in the younger Husted’s 24-foot fishing boat. (Photo by Jim Husted)

From Jim Rhodes all of the way to Mike DeWine, Governor’s Fish Ohio Day has been an adventure, thanks to walleye.

When the 42nd annual edition made the scene last Thursday at the Shores & Island Ohio tourism center in Port Clinton, everyone wanted to jump on board. Only outdoor media, politicians, and state wildlife officials are invited to go walleye fishing, however, and most were loaded on charter fishing boats with veteran skippers from the sponsoring Lake Erie Charter Boat Association.

It’s a fun day on the water, but often all too short to get more than a taste of Lake Erie’s bounty. It’s followed by a quick lunch at Shores & Islands Ohio and about an hour of speeches, generously praising the Walleye Capital of the World. Even if some anglers didn’t get a chance to hook a lunker.

Politicians aren’t noted for their angling prowess, but Jim Rhodes was an avid angler, and so were his grandkids. In the late 1970s, Rhodes went fishing with his pals on Fish Ohio Day and put his grandkids on a larger, more comfortable boat heading out of Channel Grove Marina owned by Bob and Ginny Brown on East Harbor, the host site for many years.

When the boat caught fire heading from the gas dock, the kids were quickly deposited in the water and rescued. When asked what he would do now, Rhodes never floundered.

If there is one politician this year you can count on to catch a few walleye, it’s Lt. Gov. John Husted. He went fishing with his dad, Jim, on Thursday morning. A traditional kind of guy, he relied on the old-style drift-and-cast fishing methods, and a good, old spinner rig and nightcrawler.

The Husteds put some walleye in the cooler while drifting north of Kelleys Island, bumping reefs and rockpiles with their lures, before the younger Husted boated a dandy 26-incher, easily topping the governor and almost weighing the trophy walleye of the day.

“As someone who fishes the lake frequently, I can say that it boasts the best walleye fishing in the country,” said Husted. “I keep my boat at a local marina, and I’m always ready to go walleye fishing.”

Whether it has been the long period of high water that has made walleye spawning so successful over the last decade, or just good luck, the walleye have never been so plentiful. Having written about the tremendous fishery for a half century, and caught my share over the years, Fish Ohio Day puts many in touch with great fishing and good times on the water.

Having fished with Gov. Mike DeWine and his grandkids on Fish Ohio Day a couple of years ago, I’d readily do it again. DeWine is a gentleman, a patient teacher, a sportsman and his grandkids are polite and accomplished anglers.

DeWine also knows Lake Erie needs protection, especially from harmful algal blooms, and has spent millions of our money on his H2Ohio programs around the state to help keep Lake Erie clean.

“Each year, Fish Ohio Day celebrates Lake Erie’s world class fishing and the many agencies and organizations that are dedicated to keeping the lake healthy and beautiful,” said DeWine. “The day offers an opportunity to experience the lake’s great fishing firsthand.”