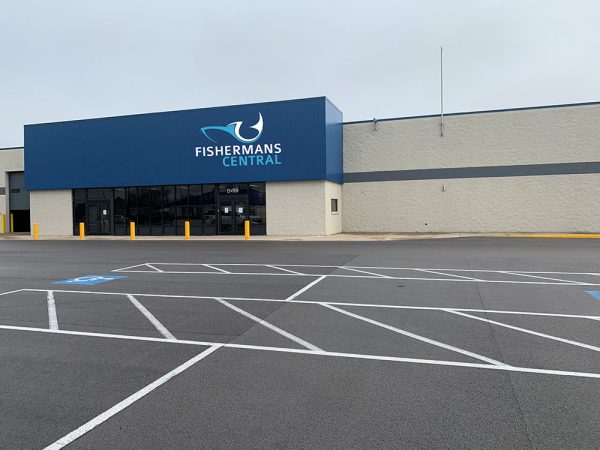 This is an artist’s rendering of the new Fishermans Central fishing tackle shop and marine service and repair that will be opening in in March 2020 in the Knoll Crest Shopping Plaza in Port Clinton.

Fishermans Central, a large fishing tackle retailer that has become a mainstay for anglers in the Portage Lakes area and around northern Ohio, is adding its second location in Port Clinton’s Knoll Crest Plaza next spring. The new shop will feature 27,000 square feet of fishing tackle and a 3,000-square foot marine repair shop.

Fishermans Central made its debut on the south side of Akron in 2014, and has quickly grown into one of the top fishing tackle locations in the state for both retail and internet sales of rods, reels, lures and terminal tackle.

“We plan to be ready to go in March 2020,” said owner Dan Blackert, a retired IT director and avid angler who is following his dream of being a major force in the fishing tackle business.

“This is a very big step, and quite nerve wracking,” said Blackert. He emphasized that Fishermans Central is not a big box store, but rather a large home town tackle shop.

“The five employees that helped to open our store in 2014 are still on the staff,” he said.
“Fishermans Central has been very involved with bass tournaments and competitive bass anglers, as well as fishing clubs all around the area,” said Blackert. “But we keep the pegs on our displays full of all kinds of fishing tackle, from panfish tackle great for the Portage Lakes to lures for catching muskies at West Branch Reservoir.”

Blackert is planning to tweak the inventory at the Port Clinton store to appeal to the Lake Erie market, where walleye, yellow perch and smallmouth bass fishing rule.

“I’m also looking forward to spending a lot of time on Lake Erie,” he said. “We’ve already purchased a condo in the area, one that has a nice boat dock.”