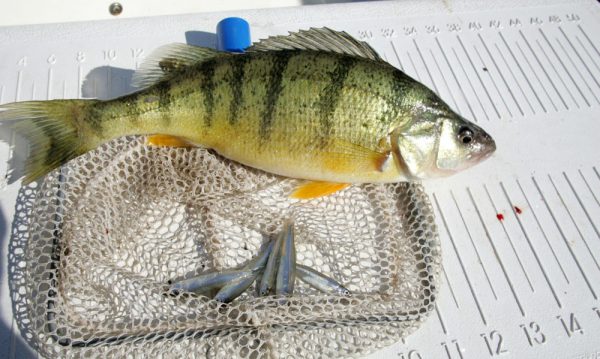 Despite a little windy weather now and then on Lake Erie, the overall fishing was pretty good this week around Port Clinton.

Yellow perch continue to try to be in the spotlight with many anglers catching nice sized ones. Fisherman’s Wharf reported a couple great days last week with a few of those days ending with catches being close to limits. The hotspots of the week were at the Marblehead Lighthouse, west of the Catawba Peninsula to E Can, and also the Clinton Reef area. Shallow waters are the key to catching fair to very good numbers of perch. The waters between 12 and 22 feet deep proved to be the best. I talked to a guy who said he did excellent while perch fishing in Sandusky Bay this week. He caught a two man limit just outside the Cedar Point channel markers.

Emerald shiner minnows are in good supply and the traditional “shiners” seem to be the favorite bait of the schools of perch that are finally showing up.

Fishermen enjoyed yet another great week of walleye fishing, with casters grinding them out of the rocks and reefs around Kelleys Island. The anglers drift-and-cast fishing have also been going east to the Huron and Vermillion dumping grounds. The walleye there are gold, fat and beautiful. When the winds have kicked up, the use of bottom bouncers with three- to four-ounce weights on them have worked. On days where the winds are calm, then casting out single-spinner rigs with a one and a half ounce weights have also been productive.

Trollers have been working the Vermillion dumping grounds area and they have been doing excellent. The best lures for success have been Bandit diving plugs with two-ounce weights set at 110 to 130 feet being the boat. Tru-Trip Deep Divers with spoons are also catching their share of walleye, as well. The Tru-Trips are being set back at 75 feet. Trolling speeds should be between 1.8 and 2.0 miles per hour.

It looks like it is going to be a great week of fishing heading into the weekend. Head boats and charters are still out fishing, so book a trip and put some tasty perch and walleye in the cooler.