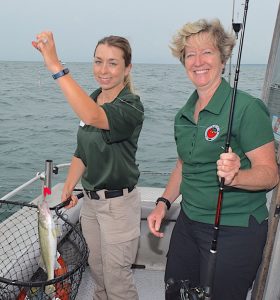 We will start off with bass fishing this week, because Bay’s Edge Resort had the pleasure of hosting Jacob Wheeler of Harrison, Tenn., for a few days of fishing. One of America’s top tournament bass anglers, fishing fans can catch Wheeler casting and catching a lot on the tournament bass fishing trails.

He focused on the east side of Pelee Island on Friday and punished the trophy bass in 16 to 19 feet of water. All the fish caught were 5-plus pounds. Last Saturday, Wheeler headed for the Ruggles Reef area just east of Cranberry Creek and had the same success, but with smaller bass.

So, thank you, Jacob, for the great report on smallmouth bass fishing.

Walleye fishing has been great around Lake Erie . . . when the wind hasn’t been blowing! Casters have been having great luck working the rock piles in the mornings in about 10 to 15 feet of water, and then deeper waters later in the day. Anglers are reporting their best walleye catches around Kelleys Island.

Those fisherman who have chosen to troll were going up to the Canadian line to fish around the old C Can at the beginning of the week. Towards the end of the week they migrated to the Huron dumping grounds northeast of Cedar Point and north of the Huron Lighthouse. Bandits and Reef Runners have been the go-to baits to use set back to 110 to 130 feet while using a 2-ounce weight.

Yellow perch are definitely one of the fish that are on that roller coaster ride. The action was slow until Sunday, when we suddenly saw plenty of limit catches coming from C and D cans. Again, the catches are still erratic.

Finally, on to the catfish bite. Scott Heston stopped in and gave us the report for the Sandusky Bay catfish bite. He has been sending boxes of catfish to us, with most of those boxes weighing in at 200 to 300 pounds. The channel catfish between the Edison bridge and the railroad bridge are the best areas to catch some catfish. Raw shrimp seem to be the favorite baits.

As always, stay safe out on the lake and always be courteous of other boaters.