What’s in the bag? Each one provides lot of nutritious breakfasts and lunches for Ottawa County schoolchildren.

Summer is over, and schools are open again around Ottawa County, signaling the end of an epic effort by hundreds of volunteers to make sure boys and girls were fed by the Summer Lunch Program. The much-needed meals are distributed by the Ottawa County Family Advocacy Center (OCFAC) from its base in Port Clinton.

A few weeks ago, said Roe, a bunch of boys were playing in the side yard of the center, where volunteers were packing bags of food. One little boy popped the top off a half gallon of milk and drained the container.

It took an assembly line to be able to produce the 88,100 meals for this year’s Ottawa County School Lunch Program.

“It’s been so long since I’ve had milk,” said the little guy, wiping away a milky mustache.

“Those are the moments we live for at the center,” said Roe. “And why we distribute food around the county to three sites in Genoa, four in Oak Harbor, three in Port Clinton, as well as Danbury, Elmore and Woodville.”

“The volunteers put together the bags of food, and they deliver them in their own vehicles,” said Roe. “We see Magruder Hospital workers every single packing day, Ottawa County Common Pleas Court workers always help, and people from the County Drug Court are regular volunteers.”

The Jet Express and Jim O’Donnell deliver meals each week to families at Put-in-Bay. 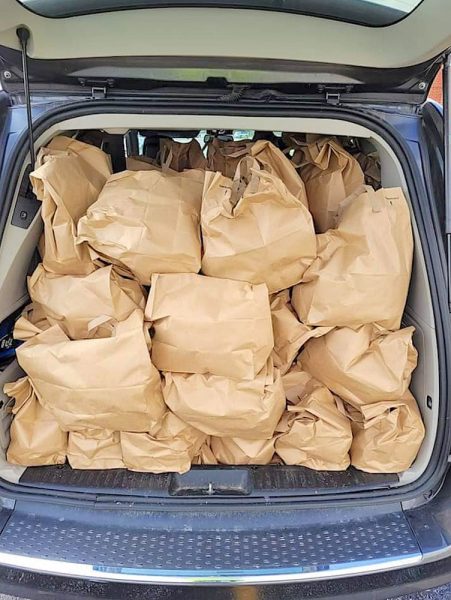 The shopping bags for the Ottawa County School Lunch Program are crammed into volunteers vehicles for distribution. Each bag contains 10 meals, including five breakfasts.

Ottawa County is a very giving place, said Roe. OCFAC also distributes food for kids during the Thanksgiving, Christmas and other long school breaks. When they began the program three years ago, they were providing 300 meals each week, and distribute far more now.

“We’re putting food in the hands of children, not putting money in the food stamp account,” said Roe. “It’s a kid-centric program. With Mac and cheese and hot dogs a staple, as well as tons of cereal, pop tarts, juice boxes and apple sauce. Last year, we distributed 4,200 half-gallon containers of milk.”

Volunteers recently took advantage of the end of summer to have their vehicles professionally detailed by OCFAC. Milk has a tendency to spill in transit.

Roe points to the project as a shining beacon in the community, of people caring for people, “and it is truly an honor to watch the incredible efforts of companies and volunteers to make certain food is in the hands of kids that need it,” she said. “It continues to support food insecurity through weekend food bags and school break meal kits in all of the schools in Ottawa County.”

OCFAC is always in need of funds and volunteers to support its food distribution efforts. To help, contact OCFAC at 419-301-0225.