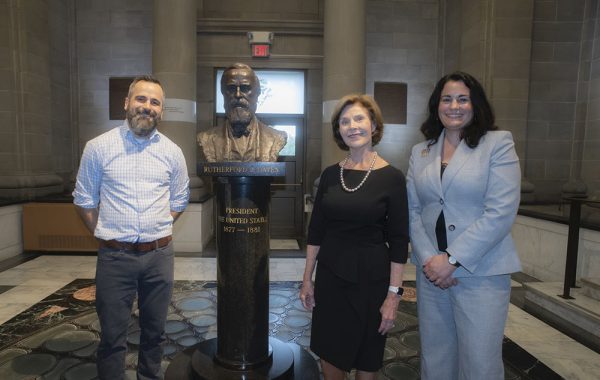 The Hayes Presidential Library & Museums were honored to welcome former First Lady Laura Bush to the historic Hayes Home and museum for a visit on Wednesday.

The former first lady met with Executive Director Christie Weininger and Curator Dustin McLochlin and toured the home and part of the museum. She was in the area for a speaking engagement at Heidelberg University that day.

“We were thrilled that Mrs. Bush was interested in visiting Spiegel Grove while she was in the area. She was warm and delightful. Mrs. Bush asked many questions about the Hayes family and the history of Spiegel Grove,” Executive Director Christie Weininger said. “I enjoyed talking with Mrs. Bush about the work she does with the George W. Bush Presidential Library and Museum and her personal causes, such as education.

“Rutherford and Lucy Hayes were firm believers in the importance of education. In fact, Lucy was the first of the first ladies to have a college education.”

In addition to seeing parts of the home important to President Rutherford and First Lady Lucy Hayes, she also saw spots that were special to Bush family friend and Hayes Presidential board member Stephen Hayes, a descendant of Rutherford and Lucy Hayes. He and his three brothers grew up in the home as boys.