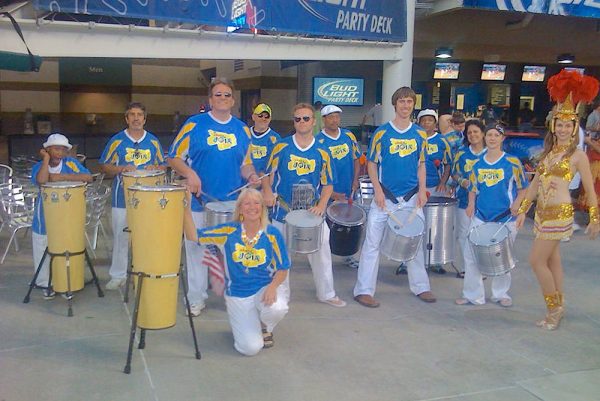 The RiverfrontLive! free Friday concert in downtown Port Clinton on Friday, Sept. 4 will present Samba Joia, which has reached audiences through Brazil’s rich and diverse rhythmic culture for over a decade.

In addition, FSO’s Maestro Carl Topilow will make a special appearance on his clarinet to perform a few selections with Samba Joia.

Made possible through a grant from the Ottawa County Community Foundation, the concert is coordinated in partnership with the Port Clinton Area Chamber of Commerce and Main Street Port Clinton. The concert will be immediately followed by a Port Clinton High School football game watch party streamed on a 20-foot blow-up screen.

Led by the FSO’s principal percussionist, Dylan Moffitt, Samba Joia has reached audiences through Brazil’s rich and diverse rhythmic culture for over a decade. Specializing in the samba reggae and samba batucada styles, the ensemble aims to provide an engaging and interactive experience for all one beat at a time.

The group features a mix of musicians, from students to community members to professional level players who are ages 12-60, and share the same love of the warm Brazilian culture.

Often recognized for his versatility as a percussionist in the classical and world music genres,Dylan founded his “Drumming with Dylan” educational outreach program in 2013 with the FSO. The program has since been recognized by the Cleveland Orchestra and was featured in the orchestra’s “At Home” residency.

Having recently returned from travels to Cuba and South India, Dylan specializes in various styles of world music, particularly Brazilian percussion. In 2013, Moffitt joined the percussion faculty of the Oberlin College Conservatory of Music and has since served on the faculty of the Cleveland Institute of Music, where he earned both his undergraduate and Masters degrees.