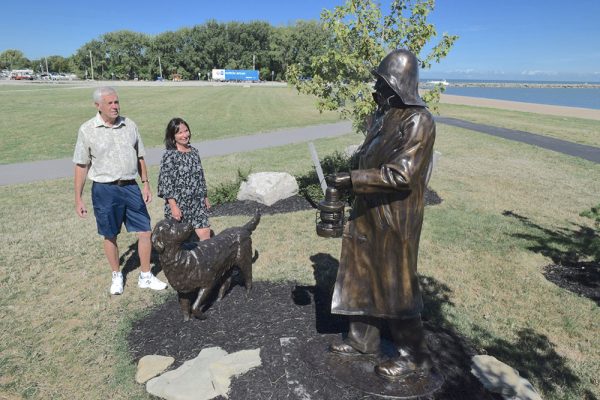 Debbie Hymore-Tester and Bill Yuhasz of Port Clinton are leading local efforts to turn the short stay of the beautiful sculpture “The Lightkeeper” and his dog in the shadow of the Port Clinton Lighthouse into the permanent home of the work of art by artist Andy Sacksteder. (Photo by D’Arcy Egan)

The Port Clinton Lighthouse had quickly become a downtown attraction in Waterworks Park when it was placed on the Lake Erie shoreline in 2015, followed by construction of the Boathouse on Derby Pond.

Their new companion, “The Lightkeeper,” has dazzled park visitors.

Everyone who admired Sacksteder’s sculpture was eager for it to become a permanent part of the park. The sculpture was on loan through October, though, and then would be put up for sale. The price tag was a bit north of $50,000.

The Port Clinton Lighthouse Conservancy didn’t have that kind of money.

“We were so taken with the sculpture, its beauty, and the nautical and lighthouse themes, I recruited local friends Bill Yuhasz, Cindy Bolte and Brandon Bucar to brainstorm a way to buy it for the city,” said Debbie Hymore-Tester, owner of CG Salon and Nail Bar, a Port Clinton salon.

Hymore-Tester, a former Port Clinton mayor who spearheaded the construction of Derby Pond in 2004 in Waterworks Park, began beating the drum behind the scenes. She and her friends discovered many loved Sacksteder’s sculpture, as well.

The artist, who now lives in Michigan, in 2014 also created a sculpture of an old seafaring captain standing next to a wide-eyed young boy that now stands in nearby Friendship Park.

“We began to gather pledges from people around town. Judging by the early results, we’re seeing just how popular ‘The Lightkeeper’ has already become,” said Yuhasz, who recently sold the Great Lakes Popcorn Company on North Madison Street, but still owns buildings there. He has long been committed to Port Clinton, and now the “Keep the Lightkeeper” fundraiser.

The Keep the Lightkeeper Voucher, with more information on donating, can be found at the bottom of this post.

Three Port Clinton locations will be accepting donations, said Hymore-Tester. They are the CG Salon and Nail Bar, Bolte Insurance and the Great Lakes Popcorn Company, all in downtown Port Clinton.

“We’re all proud of how Waterworks Park has been developing as a showplace in recent years. The removal of the tall invasive phragmites along the Lake Erie shoreline has people wondering where the new beach came from,” said Hymore-Tester, with a laugh. “But once the phragmites was removed, and city officials began to groom the beach, you could see beautiful Lake Erie as you drove down Perry Street.”

The beach and nearby Lakeview Park have become major summertime attractions.

Work on the east end of the park is being done this week, as the U.S. Army Corps of Engineers works to remove every trace of phragmites and other invasive vegetation. The area will become a showplace of native marsh species of vegetation that thrived when the Great Black Swamp dominated northwest Ohio before settlers arrived in the 1800s.

The area has become a home to migrating waterfowl and songbirds, triggering The Biggest Week in American Birding early each May in Northwest Ohio. The Black Swamp Bird Observatory hosts the event, luring about 100,000 birders to the region. 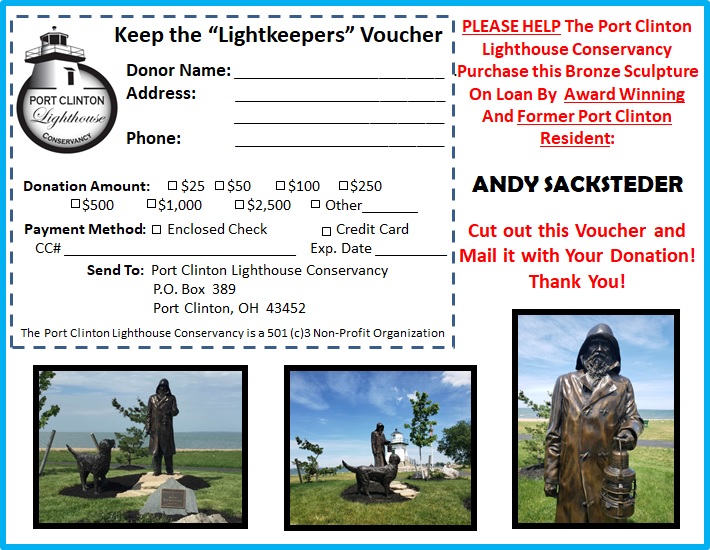