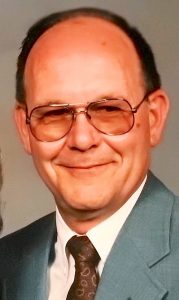 G. Keith Addy, 82 of Lakeside, died Friday, Sept. 13, at Otterbein Marblehead Senior Life Community, Lakeside. He was born Nov. 4, 1936 in Plainfield, Ohio, the son of Ralph and Audrey (Roahrig) Addy. Keith graduated from Coshocton High School in 1954 and earned a Bachelor’s degree in Mathematics Education from Muskingum College in 1958. He married Gwenn on March 26, 1961 and she preceded him in death.

Keith was a “jack of all trades,” having started his professional career as a Junior High math teacher in Marion, Ohio. He entered into the business world in personnel at Chemical Abstracts in Columbus. Keith then went on to the banking business, having worked at Tri-County Savings & Loan in Fostoria, Ohio, then moving his family to New Philadelphia, Ohio to become the president of Tuscarawas Savings & Loan. Keith left the corporate arena to start his own business of restoring and refinishing antique furniture, a hobby he loved, at Addy’s Red Barn Refinishing in New Philadelphia. In 1987, Keith started a new journey as the Marketing and Program Director for the Lakeside Association in Lakeside, Ohio.

During his tenure with Lakeside, Keith was involved in many community organizations, including the Ottawa County Gideons, Ottawa County Visitor’s Bureau, Marblehead Chamber of Commerce, Stein Hospice Board of Directors and the Ottawa County Historical Society, to name a few. Keith enjoyed being in the community and representing Lakeside and the ideals and values for which Lakeside stands.

As per Keith’s wishes, there will be no services. A private family ceremony will take place at a later date with Internment in the Lakeside Memorial Garden. Memorial contributions may be made to Lakeside Chautauqua Foundation, 236 Walnut Ave., Lakeside, Ohio 43440 or Gideons, c/o Marblehead Bank, 709 W. Main St., Marblehead, Ohio 43440.

Online condolences may be shared with the family at www.neideckerleveckcrosser.com. Neidecker, LeVeck & Crosser Funeral Home & Cremation Service, Peninsula Chapel is handling the arrangements.