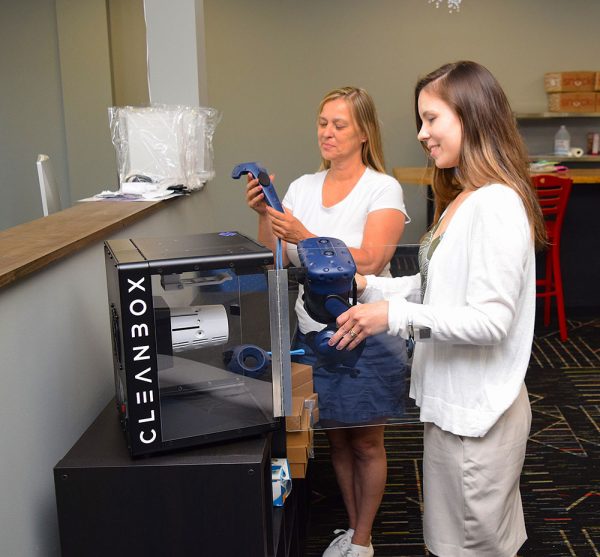 Local women Kassie Anderson and Jennifer Staib have opened the first Virtual Reality entertainment center in Port Clinton and all of Northwest Ohio, with their Visions VR bringing a wide variety of games, tours and educational content to its new location.

The woman have totally renovated a space at 1632 E. Perry Street in Port Clinton, in the Basset’s Market Plaza, to bring one of the hottest topics in the entertainment industry to the area. They will have a Ribbon Cutting Ceremony and Open House to celebrate their Grand Opening of Visions VR on Friday, Aug. 7 at Noon.

“It is the first Virtual Reality Entertainment Center in Northwest Ohio,” said Staib. “There are only about 100 virtual reality centers in the United States, and only about 600 in the entire world.”

In the gaming world, virtual reality has become popular for players, who use a headset to enter a completely digital world. Visions VR supplies the virtual reality headset and controls, with players testing their skills as a single player, a two-player team or creating teams of up to six players.

Visions VR provides a small environment for the gamers, but with space to move around. In team play, members have comfortable couches for watching the action, as well as watching what is appearing on each gamer’s head set.

“Port Clinton is a wonderful area for the virtual reality concept,” said Staib. “It will appeal to local residents, as well as tourists. That is the reason we decided to be open year-round. It’s affordable to play, as well.”

To assure safety, Virtual VR provides all of the equipment and uses a device called a Cleanbox to sterilize its headsets. The Cleanbox has been lab-tested to kill 99.9% of bacteria, fungi and virus, including COVID-19. Disposable covers and sanitizing wipes are also employed.

“Our experiences include virtual escape rooms and tours, immersive documentaries and short films,” said Staib. “And, of course, amazing games.”

The gaming world has exploded, and Visions VR has a wide variety of catalogs of games to play. Today’s technology is significantly better than five or 10 years ago, with the graphics more immersive and VR platforms that appeal to audiences of all ages.

“Visions VR is a fun experience for the whole family, especially young players and even local businesses. There are platforms that businesses can use to train employees.”

Visions VR will be expanding to educational training films, and expanding team building. It is more than games, according Kassie Anderson, and also a lot of fun.

“A couple of our favorites include a journey to the ocean depths, where you’ll find yourself eye-to-eye with a giant squid and a highly competitive, multi-player game similar to laser tag that takes place on platforms in a futuristic city,” said Anderson.

Visions VR is also featuring beverages and snacks from local stores, such as the Great Lakes Popcorn Company, Toft’s Ice Cream and the Catawba Island Brewing Company, the latter adding its custom root beer to the mix.