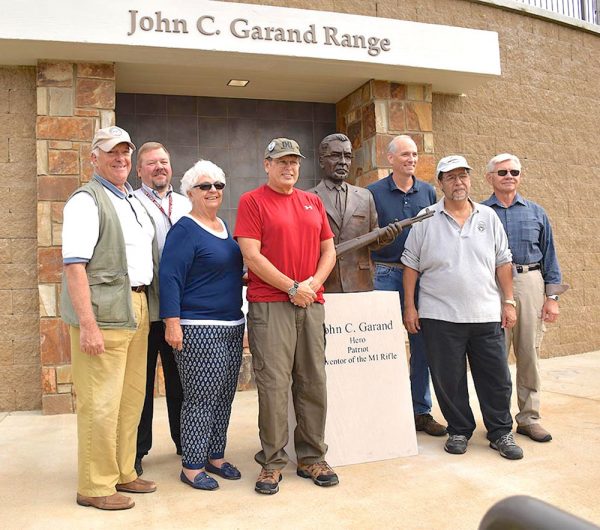 Civilian Marksmanship Program Board Members and Garand Collectors Association representatives stand in front of the new John C. Garand statue near the 600-yard range at Talladega Marksmanship Park. The statue was donated to the CMP by the GCA.

The Garand Collectors Association (GCA) has donated an overwhelming amount of support for the Civilian Marksmanship Program (CMP) and its athletes. Since 2019, the GCA has provided generous donations toward CMP’s Scholarship Program, further encouraging competitive and safe shooting, and has chosen to donate an additional $30,000 toward CMP scholarships for the 2022-2023 school year.

The CMP will be accepting complete scholarship applications until March 20. To find application forms and other CMP Scholarship information, visit the CMP website at https://thecmp.org/youth/cmp-scholarship-program/.

In 2020, the CMP added a special award to the top scholarship winner, the Carolyn Hines Memorial Scholarship – a $5,000 scholarship to be awarded to the graduating senior who best exemplifies Dr. Hines’ ideals.

With the help of the GCA’s donation, the CMP can award additional funds to those deemed the top CMP Scholarship recipients by the Scholarship Committee. The next top 15 recipients will be awarded an extra $2,000, for a total of $3,000 toward their education.

“The GCA is proud to continue our support of the CMP’s Scholarship Program,” the GCA said in a statement. “Youth are the future of the GCA, and we cannot be more proud of our direct support to this incredibly competitive and well-run program conducted by the CMP.”

Each year, the CMP offers $1,000 one-year scholarships to current high school seniors, based on merit and rifle or pistol marksmanship participation. Through these scholarships, the CMP upholds one of its missions of awarding those who present exceptional talent, motivation and determination within the field of marksmanship by furthering the education of the successful young adults involved within it.

Nearly 35 years after its beginnings, the GCA now has over 20,000 members from eight nations and 11 directors spread across the United States. Since the early 2000s, the GCA has been instructive with CMP’s growing knowledge of the M1 rifle and its influence on competition and collecting in today’s world.

In return, the CMP has been fundamental in expanding the GCA’s reach to vintage rifle enthusiasts across the country. Outside of the M1 scope, the GCA has shown continuous generosity, with donations to the CMP’s events and mission of marksmanship education.