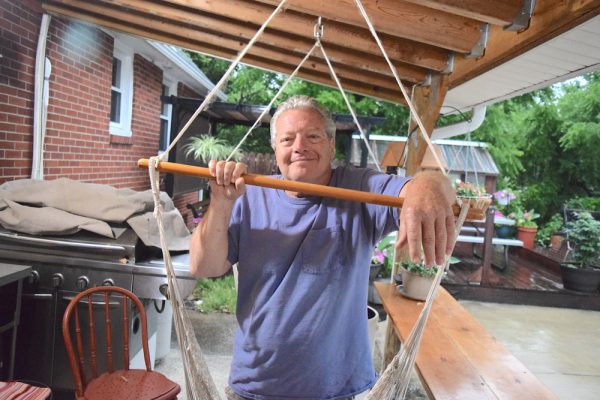 Stan Gebhardt has homes on Middle Bass Island and in Port Clinton, places where he can fiddle around in his home workshop while looking forward to enjoying an outdoorsman’s life in retirement. (Photo by D’Arcy Patrick Egan)

Stan Gebhardt gave the Erie-Ottawa International Airport his all for a decade. After amazing success in taking the small town airport all of the way to the big time, it’s time for the avid angler and hunter to kick back and enjoy Lake Erie Island life.

That formula is due to Gebhardt’s internal, unending seven-year itch.

Always a jack of all trades, Gebhardt discovered the Lake Erie Islands would be his home grounds, despite seemingly destined as a young man to have a farming career in the Bucyrus area of Crawford County.

“I was from a farming family, and I went to Ohio State and got an agricultural degree,” said Gebhardt. “I was raising feeder pigs and crops, and a relative said I’d also be perfect as an auctioneer to make extra money.”

But Lake Erie got in the way. As a four-year-old Gebhardt discovered boating and fishing with his grandfather aboard a 16-foot Lyman wooden boat with a 14-horse Evinrude outboard.

“We’d head for the first can coming out of East Harbor, and catch walleye and yellow perch. I owned a boat before I was old enough to have a car,” he said. “I never could get enough of that lake.”

Gebhardt evolved into an insurance agent for Prudential, then a Columbus office manager. When bad weather cancelled an appointment in the Lake Erie Islands area, the rugged outdoorsman decided to tour Middle Bass Island. He loved the place, and finally bumped into an elderly woman in the East Point area.

“I wanted a plot of land on Middle Bass to build a home, and she had one for $25,000,” he said. The seven-year itch kicked in, and Gebhardt found a 28-foot Marinette Sportsman and ran a water taxi, school ferry and guided duck hunters and walleye fishermen.

“A lot of the water taxi business was after hours stuff, and some days I’d be on my boat seemingly 24 hours a day. In late fall and early spring I’d open or close about 100 homes on Middle Bass, and with my airplane I’d fly to Port Clinton for groceries and passengers.”

One afternoon, Gebhardt bumped into Dick Johnson, who operated the Catawba Island Club and was looking for a new director of the Port Clinton Airport.

Gebhardt started in 2011, but grew weary of flying back and forth from Middle Bass Island in his Piper Cherokee 180, so he bought a fixer-upper home in Port Clinton.

“The Port Clinton Airport was a pretty sleepy place back then, but I it could felt it could be a real airport. An airport that would put Port Clinton on the map and make it stand out,” said Gebhardt.

Because of its major league walleye and waterfowl hunting, Port Clinton has long been a national destination, but sportsmen flew to Toledo or Cleveland and took shuttles to Ottawa County. That had to change, said Gebhardt.

When U.S. Customs and Border Protection built a massive new facility on the Route 53 Corridor in Port Clinton, within spitting distance of the airport, Port Clinton became a cost-effective option for private and business jets with a rare U.S. Customs facility.

“The big secret to success in my mind was making safety the No. 1 priority for the airport, and having the best airport staff in the country,” said Gebhardt. “Port Clinton is the friendliest airport anyone every flew in to, in my opinion, but you’ve got to have the right kind of people working for you to pull that off.

It helped that Griffing Flying Service moved from Sandusky to Port Cliinton because of the convenience of a customs facility, and the unique Liberty Aviation Museum was established in 1991, showcasing the iconic The Ford Trimotor, or “Tin Goose,” and a bevy of World War II aircraft. The Tin Goose Diner has become popular, and as air traffic blossomed the airport’s jet fuel sales have soared, and with more than $10 million in federal grants new hangars and runways were built.

The aircraft stationed at Erie-Ottawa International Airport grew from 30 a decade ago to more than 100 today. Gebhardt has developed a flying school for teens that is already licensing new pilots.

Gebhardt’s 65th birthday coincided with his latest seven-year itch, he said. After putting his love of fishing, boating and hunting on hold for the last decade, it was time for him to spend more time outdoors and with his girlfriend, Babs Klacik, general manager of the award-winning Bistro 163 pay-it-forward restaurant in Port Clinton and owner of the Xtreme Cuisine Food Truck.

“I’m actually grateful to wrap up this chapter of my life,” said Gebhardt. “My grandpas always said you should buy low, sell high and leave at the top of your game.”