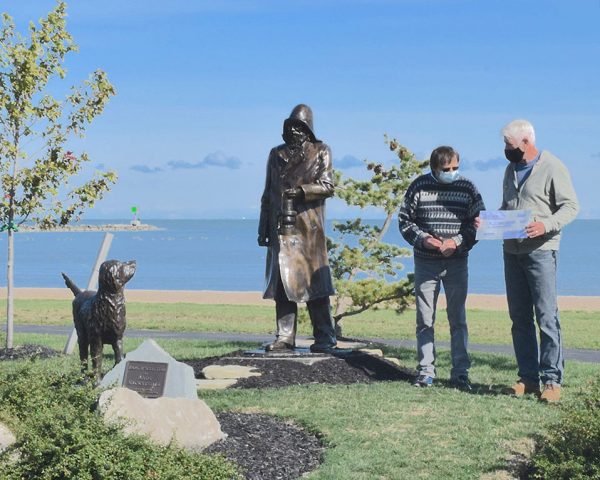 Toiling in the back area of Port Clinton’s Second Street Gallery six years ago, artist Andy Sacksteder worked for many months to create a popular bronze sculpture, “The Lightkeepers.”

Regular visitors to the second-hand shop once owned by the late Doug Garrett and his wife, Toni, enjoyed watching Sacksteder mold clay as he painstakingly created the lighthouse keeper and the keeper’s shaggy dog.

“It was fascinating to watch Andy create the sculpture,” said Toni Garrett, a member of the Port Clinton Lighthouse Conservancy. “He spent so many long hours molding clay and working to give the sculpture amazing life. I’m thrilled his work is now ours to show off.”

For mariners and Lake Erie lovers, it is a stunning piece of art.

This summer, though, it came time to sell the bronze sculptures. Sacksteder offered to first display it adjacent to the iconic Port Clinton Lighthouse in Waterworks Park for a couple months.

“It is a beautiful sculpture, and was so appropriate to be displayed next to the lighthouse,” said Rich Norgard, president of the Port Clinton Lighthouse Conservancy that renovated the old lighthouse and put it on display on the Lake Erie shoreline five years ago. “It was wonderful to have the sculpture for a couple of months. After so many visitors and local folks admired it, they wanted it to be a permanent addition.”

Rounding up the sale price of $47,000 seemed a high order, so former Port Clinton Mayor Debbie Hymore-Tester teamed up with Bill “Popcorn Bill” Yuhasz of the Great Lakes Popcorn Company and Brandon Bucare of Live Nation Concerts to get the word out.

Sacksteder, 64, whose sculpture “Captain and the Kid” already adorns Friendship Park in downtown Port Clinton, was rooting for them.

“I’d invested so much time and effort into ‘The Lightkeepers,’ and it really meant a lot to me to have Port Clinton become its permanent home,” said Sacksteder. “I come back to Port Clinton often, and relish the idea that my family and I can often visit the sculpture.”

Sacksteder and his wife, Chris, now live in Gladstone, Mich., helping to take car of her parents.

Sacksteder, who grew up in Fostoria, Ohio, didn’t set out to be an artist.

“When I moved to Port Clinton, I worked as a landscaper,” he said. “Then I seriously injured my back at the age of 52, and needed to try something else. While in the hospital, I saw sculptures and was quite fascinated by them.”

Sacksteder began working with Jim Havens of Elmore, who has a studio in Gibsonburg, and is famous for his sculptures at Schedel Arboretum & Gardens.

An alum of The Ohio State University and a Buckeye football fan, one of Sacksteder’s early creations was a bronze statue of Woody Hayes, called “First and Ten.”

“I make bronze sculptures using lost-wax casting, a method that dates back about 6,000 years. It is a long and involved process and each sculpture takes about four months,” said Sacksteder.

When creating the “The Lightkeepers” dog, patterned after his own pets, the artist wanted keeper and dog to be looking into each other’s eyes, showing their strong connection. It took about 15 tries, requiring Sacksteder to remove the dog’s head each time.

“I finally got it the way I wanted,” he said with a smile. “And the sculpture now sits where I wanted, too. It belongs on the Lake Erie shoreline in Port Clinton.”

The two sculptures allowed him to tell a forever story, one of keeper and dog protecting mariners as they returned to port.

It took a tremendous fundraising effort to purchase “The Lightkeepers,” said Yuhasz.

“I think we’re all a little surprised not only of our success, but how quickly it all came together. So many people visiting Waterworks Park were so impressed with it, and were willing to help.”