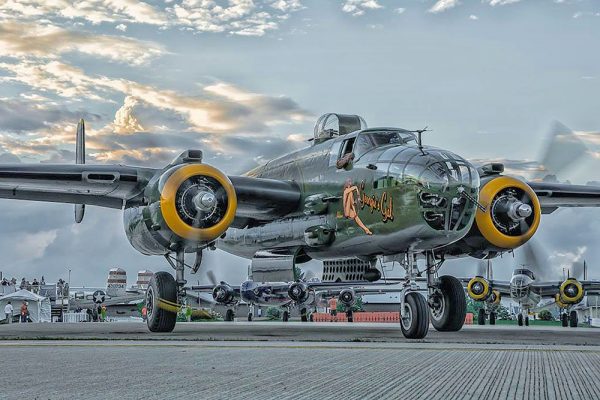 Pro and amateur photographers are invited to take photos of the day’s flights of the World War II B-25 “Georgie’s Gal” and enter “Best Shot of the Bomber” contest.

The Liberty Aviation Museum of Port Clinton will be making two demonstration flights of the World War II B-25 “Georgie’s Gal” over and around the Erie-Ottawa International Airport on Saturday, Sept. 21.

Veterans who visit the museum or eat at the diner that day may enter their name in a drawing to accompany the flags on the second flight.

Pro and amateur photographers are invited to take photos of the day’s flights and enter “Best Shot of the Bomber” contest. Photos will be judged by museum staff and the winning photographer will be have the print professionally framed.

The North American B-25 Mitchell is a medium bomber that was introduced in 1941 and named in honor of Major General William “Billy” Mitchell, a pioneer of U.S. military aviation. The B-25’s most famous exploit was the Doolittle Raid of April 1942.

Georgie’s Gal is a B-25J, which is highlighted by the “bombardier’s nose” allowing for the installation of a bombsight. Nearly 10,000 of the twin-engined B-25’s were manufactured and about 45 are still airworthy.